Mathematica is symbolic and case sensitive. In the Mathematica notebook, you can write a few lines of code and then hit “Shift”+”Enter” to evaluate those lines. A semi-colon can be used to suppress the output from a particular line. Let’s try using an example. The following expression relates the variables

Mathematica is able to store that expression without evaluating either

, there are two options. The first is to set

was assigned 2 and 3, the output was suppressed using a semi-colon. In this first option, the value of

is set throughout the lines of the code and so if

appears anywhere else it will adopt the most recent assigned value. Another option is to use evaluation rules. The following code evaluates

and then evaluates it again when

itself is not assigned any value and so, when it appears afterwards, it is still unassigned:

You can always use the “Clear” command to clear the variables before any operation. Also, note that in the second option, the evaluation of

was not stored in any variable but was just shown in the output. In the following code, the “Clear” command is used first to clear the variables, and then the evaluation of

is stored in the variable

Notice that after evaluating the previous lines of code, the variable

appears in blue and the variable

appears in black. Blue variables indicate that they are neither recognized functions in Mathematica, nor do they have any assigned values. The variable

appears in black as it has been assigned the expression in the first line.

in Mathematica can also be used to evaluate an expression using machine precision. See the following snapshot where

is evaluated three times when

. In the first time,

and the square roots are not evaluated. The second time,

and so Mathematica automatically reverts to machine precision. The third time, the function

is used to evaluate the expression using machine precision: 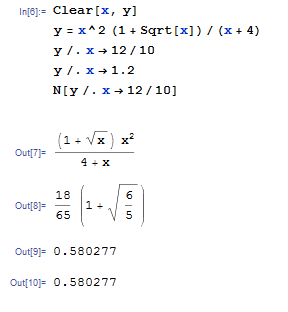 The curly brackets {} are used in Mathematica to define vectors and matrices. For example, to define

you can simply write:

You can view the output in “MatrixForm” as follows:

Note that you should not define a matrix and use the “MatrixForm” keyword in the same line. Otherwise, the variable

will not contain a proper vector but rather will contain the “MatrixForm” generated image.

There are two ways by which a matrix can be defined. The first is by directly defining the components using curly brackets. For example, to define:

Each row in the matrix would be defined between two curly brackets, individual rows would be separated by commas, and finally a set of curly brackets is used to enclose the rows as follows:

The second way to define a matrix is using the “Table” command. The following command defines a table with 3 rows (

The “.” character is used for the dot product and to multiply matrices by vectors:

The determinant, inverse, and transpose of the matrix

can be obtained as follows:

Note in the above code that the symbol

is reserved in Mathematica for the function that evaluates numerical expressions. Therefore, the variable

was used for the inverse of

.
In order to extract a particular entry from a matrix, a set of double square brackets will be used. For example, the following code defines a matrix

and then displays the second row of

, the entry in the second row and third column of

, and the third entry in

You can perform a whole operation on one of the rows of a matrix. For example, we can take the second row of the matrix

defined above, multiply it by 5, add the first row and store the result in the second row of

. This can be done in one step as follows:

You can also insert a row in a matrix. For example, the following code inserts the vector

as the third row in the matrix

defined above and store the result in the matrix

If on the other hand you want to store the

as the third column in

, you can simply transpose

first, use the insert command, and then transpose the output:

You can also drop a row or a column in

. To drop the third row, simply use the “Drop” command as follows:

, drop the third row, and then transpose the result back:

There are numerous built-in functions in Mathematica. The arguments of these functions are entered using one set of square brackets. The first character in the function is usually a capital letter. Always remember that Mathematica is case sensitive, so, it can recognize Sin[20] but cannot recognize sin[20]. The following show the usage of the functions “Sin(

]” which gives the cross product between the vectors (

The built-in function “Sum” can be used to evaluate the sum of a sequence of numbers. For example, consider the sequence with the terms:

To find the sum of the first 10 terms using Mathematica is straightforward:

If the infinite sum of the sequence exists, then Mathematica can evaluate it. For example, consider the sequence:

The infinite sum can be found using Mathematica as follows:

As Mathematica is a “Mathematics” software, it can be used to calculate derivatives and integrals. For example, consider the relationship

The first derivative of

The second derivative of

On the other hand, the integral of

While the bounded integral of

All this can be done in Mathematica (in that respective order) as follows:

Note, however, that Mathematica does not add the constant of integration for the indefinite integral.

The “Chop” command can be used in numerical calculations to set numbers that are very small to be equal to zero.

There are numerous ways to display plots in Mathematica. Here we will focus on two commands “Plot” and “ListPlot”. The first is a direct method to plot a relationship. Consider:

We can plot this relationship on the domain

We can plot two different functions on the same plot, and we can use many options like adding a title, labels to the axes, and legend:

The following is the produced plot 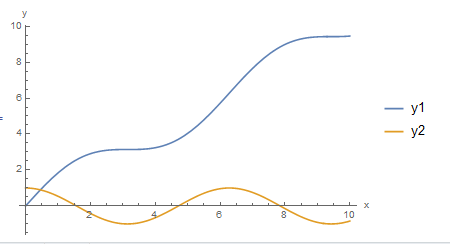 The function “Show[]” can also combine multiple plots or graphics objects. You can visit the Mathematica Plot webpage to view the possible options that can be used to make your plots look professional. In particular, you always have to define the axes labels and the units (if known) for the variables used.

The second method for plotting is the “ListPlot”. This is used to plot data given in a table. For example, consider the

You can view the data using “ListPlot” as follows:

The following are the two plots produced using the above commands. You can visit the Mathematica ListPlot webpage to view the possible options that can be used to make your plots look professional. 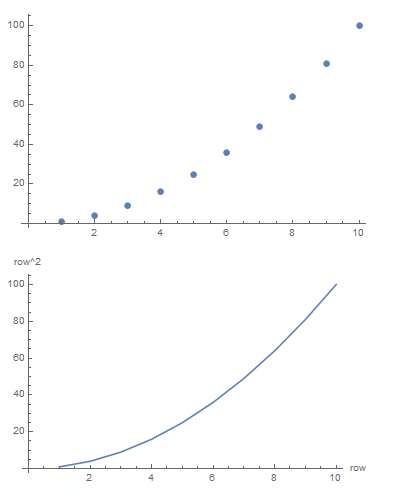 There are different ways of constructing loops in Mathematica. We will be using “Do”, “While”, and “For”. The “Do” command evaluates an expression looping over a variable. For example, let’s define a vector

of length 100 with zero entries:

using the “Do” command. For example, the following assigns the value

to the entry number

This could have been done in a different way using the “While” command as follows:

In the above example,

is the length of the vector

and then adds 1 to

. The command is repeated while

The “For” command can be used for the same thing as follows:

In the above code, the “For” function starts with

and keeps looping as long as

while adding increments of 1 using the command

. For each value of

The “For” command is very versatile, in the following code we start with

, and keep looping as long as

. In each increment, we set

User defined functions are useful tools to create specific functions that can be used throughout the code. Functions are defined using the symbols “:=”. The arguments of the function appear on the left hand side of the definition between a set of square brackets. Each argument is followed by the character “_”. The right hand side defines the calculations of the function and the output. For example, consider a function that squares its arguments. This would be defined as follows:

The following function returns the sum of the first “i” terms in the vector “x”:

You can define procedures using the function definition by using parentheses. For example, the following function takes a vector, calculates the number of components

takes the value of 10 when the function

undefined after the function is called:

Mathematica has built-in functions that can solve a multitude of equations. We will present the functions “Solve” and “DSolve”. Solve can be used to solve equations or inequalities. For example, consider the function:

To find the values of

we can solve three equations in three unknowns as follows:

Notice that two equal signs are used to differentiate from solving the equation and actually assigning values. Type the above in Mathematica and notice that the solution is given as a set of rules for

. To utilize these rules in the expression for

you can type the following:

The final outcome is that

has the following expression:

Solve can also be used to solve nonlinear equations:

The “DSolve” built-in function can be used to solve differential and algebraic equations. For example, consider the differential equation:

with the boundary condition

. This solution can be obtained using the “DSolve” function as follows:

Notice that the differential equation and the boundary conditions utilize the double equal characters and are inside a set of curly brackets. The last line in the code extracts the solution which is in the form of a rule and utilizes it to define the relationship for the variable