A (SDOF) system is one for which only a single coordinate is required to completely specify the configuration of the system. (This is a suitable working definition for now.) There are typically many possible choices for the coordinate to be used, although some are more natural than others. With a system, we get one governing differential equation of motion. The specifics of the equation depend on the exact nature of the problem.

We begin our study of vibrations by considering free vibrations of a system. These are the easiest to deal with and understanding these systems is fundamental to understanding more advanced topics in vibration. To keep things as simple as possible, we begin studying undamped free vibrations. The effects of damping will be added in subsequent sections.

Consider the system shown in Figure 2.1 which is probably the simplest possible vibratory system. Here a body of mass

. The spring has an unstretched length

. This is a SDOF system since we need only one coordinate (location of the mass) to completely specify the configuration of the system. There are many possible coordinates we could choose.

Figure 2.2 shows three possible coordinates, however obviously many others could be chosen as well. In this figure

is measured from the while

are measured from other fixed locations. While all of these are valid choices for the coordinate, we will see from our study of vibrations that there are advantages to measuring displacements from the , and so we will chose to do so here.

is to the right while for

it would be to the left. Any one of these is fine and will work, but once you have decided on your coordinate (and therefore the positive coordinate direction), you must stick with that choice in all that follows.

as the coordinate (assuming

Figure 2.3 shows the FBD/MAD for our system using

as the coordinate. Applying Newton’s Lawas we get:

allows equation 2.1 to be written as

Equation 2.3 is the standard form of the equation of motion for the undamped free vibrations of SDOF system. If a different coordinate had been used it would simply replace

in equation 2.3. For example if we had chosen

as the coordinate, the equation of motion would have the form

Determine the equation of motion for a simple pendulum of length

as shown below. Use

The compound pendulum shown below has a mass

. The distance from the support to the center of mass is

. Determine the equation of motion for this pendulum. Use 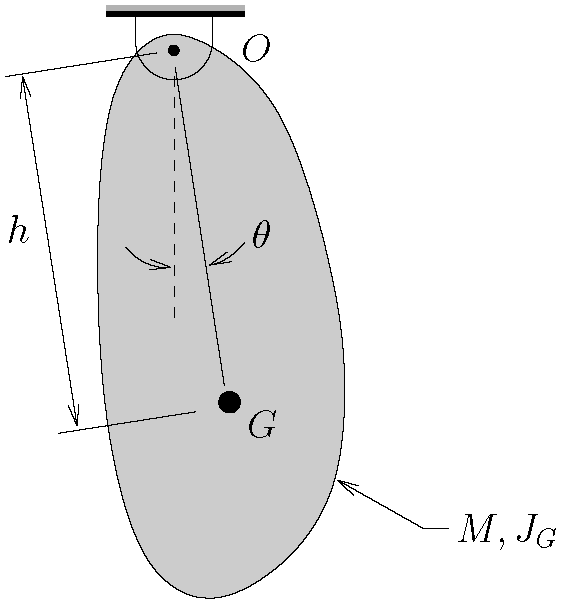 Equation 2.3 is a second order linear ordinary differential equation (ODE) with constant coefficients. Accordingly, we assume a soltuion of the form:

which when substituted into Equation 2.3 results in

which has two roots given by

As a result the solution to equation 2.3 becomes

must be allowed to be complex numbers here.) To procede we make use of Euler’s identity

the solution in equation 2.5 can be written as

Since the response of the system in equation 2.6 must be real,

must be real which implies that

are complex conjugates.
Equation 2.6 is the general solution to equation 2.3 and is the free undamped vibration response of a SDOF system. The response is simple harmonic motion which occurs at a frequency

which is called the natural frequency of the system. For the simple spring mass system we are considering, we see from equation 2.2 that

For a general SDOF system, recall that the standard form of the equation of motion is

The natural frequency, which is a fundamental property of a vibrating system, can be determined by inspection if the equation of motion is expressed in this standard form. Note that

in equation 2.3 is always in units of rad/s.

There are two unknown constants

in equation 2.6. We determine their values typically by considering the initial conditions for the system. Since we have a two unknown constants, we need to specify two initial conditions. These are typically the starting position and velocity of the mass. For example, at a start time

could be negative). Equation 2.6 then gives

and using the second initial condition leads to

The response of the system is therefore given by

which completely specifies the response of the system for all time

Other forms of the General response

While equation 2.7 represents the response of the SDOF undamped system, the solution may be expressed in other equivalent forms:

These relationships are shown in Figure 2.4. Note that

is the time required for the harmonic motion to repeat itself (i.e. to complete one cycle).

is related to the natural frequency

Another common unit for frequency measurement is Hertz (Hz) or cycles per second. Since there are

radians per complete cycle, we note that

is the natural frequency expressed in Hertz. Similar to Equation 2.8 we note that

We can also think of the response of the undamped SDOF system in terms of rotating vectors (another way of thinking about a subject is often helpful). Consider two vectors, with magnitudes 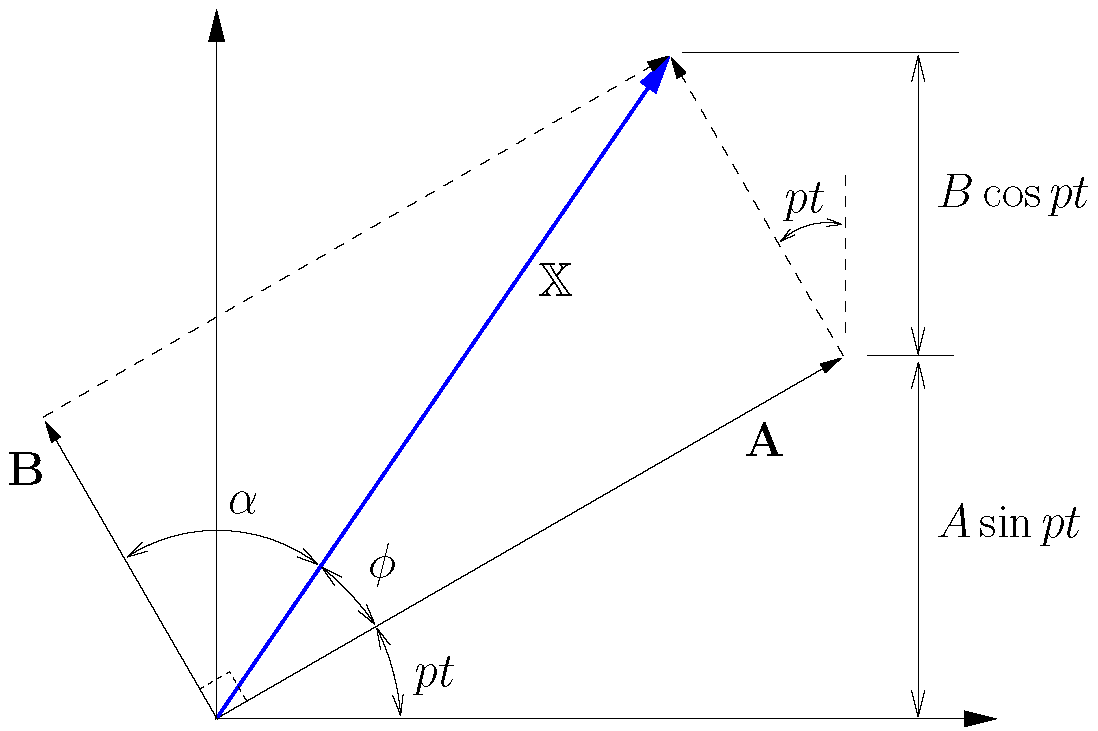 The (vector) sum of

which also rotates at a rate

can be seen to be

Now, guided by our previous results

we see that if we let

can be interpreted as the vertical component of the rotating vector

. As can be seen from Figure 2.5, this vertical component can be expressed as

which agrees with our previous results (noting that

For conservative systems we can also use an energy approach to obtain the equations of motion. Since the total mechanical energy is conserved in these systems, the sum of the kinetic energy

and the potential energy

will be a constant

where the actual value of the constant can be evaluated, if necessary, from the initial conditions. Differentiating Equation 2.10 with respect to time gives

which leads directly to the equation of motion for the system.

Consider the simple spring-mass system in Figure 2.1 with configuration described by the coordinate

measured from the equilibrium position. The potential energy stored in the spring when the mass is at some location

represents the speed of the mass, the kinetic energy in the system is

Since this system is conservative, the total mechanical energy can be expressed as

and differentiating with respect to time yields

Equation 2.11 must hold for all times

and for all values of

. The only way this can be satisfied (since

) is to require that

which is the equation of motion for the system obtained previously.

Note that if we have a conservative system and we assume harmonic motion at the start, we can obtain the natural frequency somewhat more directly. For such a system, the mechanical energy is continually converted between potential and kinetic energy. At the extremes of the motion, when the mass momentarily stops and changes direction, there is no kinetic energy in the system so that all of the energy is potential energy. Hence potential energy is at a maximum value

. Similarly, when the mass is moving past the equilibrium position, the potential energy is a minimum while the kinetic energy has a maximum value

. If we make the assumption that the potential energy of the system is zero at the equilibrium position, then these two maximum values for the energy will have the same value, i.e.

measured from the equilibrium position). If we assume the system undergoes simple harmonic motion given by

then the maximum displacement is

Similarly, the speed is given by

which has a maximum value of

Substituting these expressions into Equation 2.12 gives

which is the natural frequency of the system found previously.
This approach is known as Rayleigh’s Method and we will encounter variations of this approach later on in the course. Note that this approach is limited to conservative systems which have zero potential energy at the equilibrium position.

Using an energy approach, determine the equation of motion for a simple pendulum of length

as shown below. Use