The systems we have considered so far have been relatively simple so we were able to find analytical solutions. This is usually possible in only the simplest situations. For more complicated systems, say ones which include

it is very difficult, if not impossible, to determine analytical solutions. In these situations we usually resort to numerical solutions. Sometimes however, other approximate techniques can also be useful. In particular, Rayleigh’s Method is well suited for use with continuous systems.

Recall that for discrete systems, Rayleigh’s Quotient was expressed as

is the stiffness matrix,

is the mass matrix and {

} is used in 11.1 to return an upper limit on the lowest natural frequency.

when all of the masses in the system undergo simple simultaneous harmonic motion, as happens in the modal responses.

We can also apply this idea to continuous systems. If

is some representative displacement function, the procedure will be to

It is important here that the mode shape assumed in step (a) satisfies the (geometric) boundary conditions of the problem. If this is the case then the frequency

determined by this procedure will again be an upper bound on the lowest natural frequency. If the assumed mode shape doesn’t satisfy the (geometric) boundary conditions in the problem, then we no longer have this guarantee.

To apply Rayleigh’s Method to beams, we need to be able to determine the potential and kinetic energies associated with a beam vibrating in a given assumed mode shape. 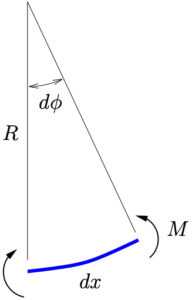 Consider an initially straight beam, deformed to some arbitrary configuration

(limited to small motions) during its motion as shown in Figure 11.1{a}. Figure 11.1{b} shows an infinitesimal element of the beam during this motion. At this point the beam element has a radius of curvature~

which is related to the included angle 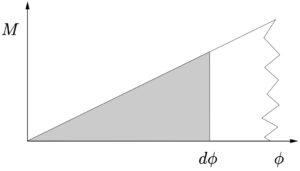 Now, consider the infinitesimal work done on the beam element as it is deformed from its initially unloaded straight (equilibrium) configuration to one with an included angle

which is equal to the area under the

graph as shown. For an elastic beam, this work done on the beam is equal to the strain energy

stored in the beam element, so that we get

The maximum strain energy occurs when

which occurs at the same instant for every point on the beam. Using 11.7 we find that

Equation 11.8 represents the maximum strain energy stored in the beam for a given (assumed) mode shape

Equation 11.8 can equivalently be written as

which may be easier to use in some cases.

Once again consider the infinitesimal beam element shown in Figure 11.1(b). The kinetic energy of that element is given by

is the mass of the infinitesimal element and its speed is given by (This considers only the translational kinetic energy and ignores any rotational energy, i.e. Euler beam theory.)

This is a maximum when

which occurs simultaneously at all points on the beam. Therefore the maximum kinetic energy in the vibrating beam is

As we have seen previously, for a conservative system,

Equation 11.12 is Rayleigh’s Quotient for beam applications where, as in the multiple degree of freedom cases discussed previously,

Extensions to Rayleigh’s Method for Beams

For beams, Rayleigh’s Quotient, given by 11.12 was obtained by considering the ratio of the maximum potential and kinetic energies in the system. We can extend this idea to consider additional springs and masses in the system.

Consider the system shown in Figure 11.2. To determine the potential energy stored in the system for an assumed mode shape

, we can include the potential energy stored in the springs as additional terms

are the deflections of the beam at locations

respectively. The maximum potential energy stored in the systems then becomes

Similarly, the extra kinetic energy in the beam due to the additional masses is given by

However, we have seen in equation 11.10 that

so that the speeds become

These will be maximum when

so that the maximum additional kinetic energy is

This can be generalized to a beam with

A driveshaft for a marine propeller can be modeled as shown below.

for this bearing such that the natural frequency of the alternate design is the same as for the original design. Express your answer in terms of

.
Use the same assumed mode shape

and once again neglect the mass of the shaft in your calculations.

and a wing tank of mass

when filled with aviation gasoline. 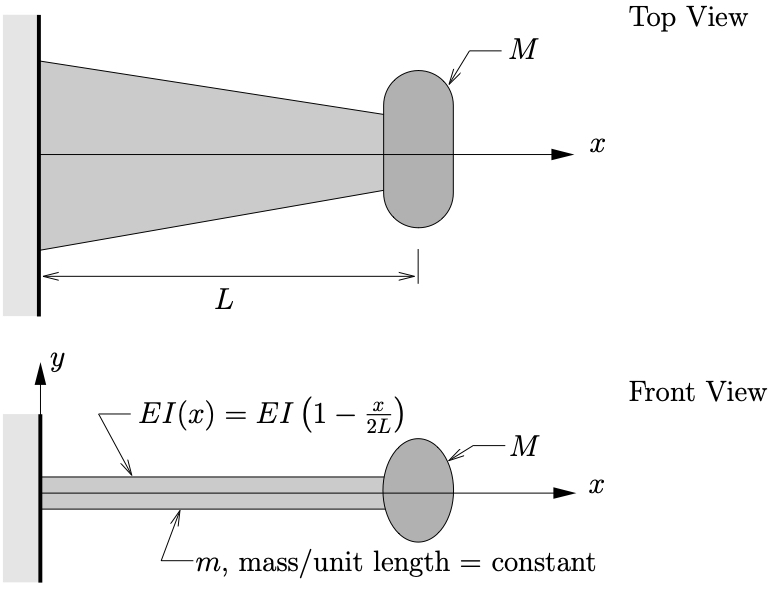