is the magnitude of the impulse. To proceed, we next need to consider the response of the system due to an impulse that is applied at some other time 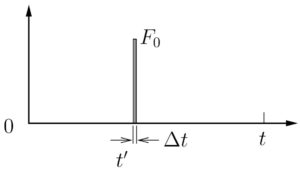 . In such a case the response of the mass at time

due to an impulse applied at an earlier time

is the elapsed time after the impulse was applied. Note that this assumes that the mass is at rest at time

, which is after the impulse has been applied. Note that with the assumed initial conditions, the response of the mass

, compared to what would have occurred if the impulse had not been applied. 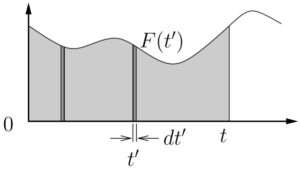 Figure 7.9: Forcing function represented as a series of impulses

as shown in Figure 7.9. This function can be considered to be composed of an infinite number of infinitesimal impulsive loads, a few of which are illustrated. Again, we are interested in the response of the mass at some arbitrary time

. This response will be affected by all of the impulses that have been applied up to time

. Consider one such impulse at time

. The application of the impulse

, with the change in the position of the mass at time

exactly analogous to our previous results. As discussed previously, this actually represents the

in the response due to the application of this one impulse. To find the actual position of the mass at time

, we simply add up (ie integrate) the effects of all the individual impulses up to time

, which are the only ones that can affect the position at time

for an arbitrary load

. As discussed, this assumes that the initial conditions are

If instead we have more general initial conditions given by

then hen (7.10) must be replaced by the more general form

Convolution with Base Excitation

. We have already seen that the equation of motion in such a case is

This is identical to the equation of motion in equation (7.1) with

. As a result, all of our previous results can be applied. In particular, Duhamel’s Integral (equation (7.10)) becomes

So far we have only considered undamped situations. We will now consider the response of a spring–mass system with a viscous damper subjected to an impulsive load. We will again assume the initial conditions are

before any impulses are applied. Similar to the undamped case, the initial conditions just after the impulse has been applied are

The subsequent free vibration response is given by

With the given initial conditions, we find that

so that the response becomes

If the impulse were instead applied at some later time

, the response would be

Now as before we consider an arbitrary forcing function to be composed of an infinite number of infinitesimal impulses. The response at time

due to the impulse applied at some earlier time

The total response at

before the impulses are applied this result needs to be generalized as before.