The solution to this general form of the equations of motion is beyond the scope of this course (but only slightly). However, we will consider a special case in which the forcing functions

are harmonic, at the same frequency and in-phase with each other. In such a case the equations of motion become

To find the steady–state response of the system, we again look for solutions in which the masses are undergoing simple simultaneous harmonic motion at the forcing frequency

The equations of motion become

which to be valid for all times

Unlike the free vibration situation, the RHS of equation (8.35) is not zero, so that a unique solution for the amplitudes of each of the masses can be found as

which is valid provided

matrix, the inverse is

so we see from equation (8.36) that the steady–state amplitudes of the response a

Determine the steady state response for the system shown.

As we have discussed, a machine (such as illustrated schematically in Figure 8.12(a)) may experience excessive vibrations if it is acted upon by a harmonic force at a frequency near its own natural frequency. Figure 8.12(b) shows the dynamic magnification factor for this system and illustrates the large amplitudes that can occur near resonance. To reduce these vibrations, we can try to add mass, change the spring stiffness, add damping, change the operating speed if possible, etc. Another possibility to eliminate the vibrations is to add a vibration absorber to the system as illustrated in Figure 8.13.

) in the original system.

Figure 8.14 shows the FBD/MAD for the vibration absorber and the original system. The equation of motion for mass

while for the absorber we get

In matrix form these can be written as

We look for solutions of the form

With this, the equations of motion become

which to be valid for all times

To solve for the steady–state vibration amplitudes, we can see from the second equation that

With this result the first equation becomes

and upon substitution of this result into (*) we also find

Note that these are the same results we would have obtained had we applied (8.36) directly.

To help non–dimensionalize these results, we divide the top and bottom of equation (8.40) and (8.41) by 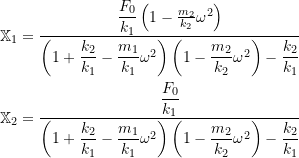 these can be written

where we have used the fact that

From equation (8.42a) we can see that the amplitude of vibration of the original mass will be zero if we select the natural frequency of the vibration absorber to be equal to the forcing frequency (

The amplitude of the motion of the vibration absorber is simply the static deflection that would result if the disturbing force were applied statically to the vibration absorber itself in isolation. The negative sign in (8.43) indicates that the absorber mass moves out of phase with the forcing function. This is illustrated in Figure 8.15. Note that the net force acting on the original mass is always in balance, resulting in no motion for the original system

, to obtain the appropriate

we require
(i) a large spring constant

and a large mass

, or
(ii) a small spring constant

and a small mass

In the first case, a large vibration absorber mass must be used, which may be a problem. In the second case, a small mass may be used along with a light spring, but since

from (8.43), this means that the vibration absorber will undergo large motions which is also usually a problem. The choice of appropriate values for

is usually a tradeoff between these two considerations. We must also consider the effect of the vibration absorber on the natural frequencies of the combined system which we will discuss next.

is selected to be equal to the forcing frequency

In that sense, the natural frequencies of the combined system can be found easily by setting the denominator in equations (8.42a) and (8.42b) to zero

since this implies that the amplitudes of the response grow towards infinity. The values of

To find these natural frequencies we can expand (8.44) and substitute

Equation (8.45) is a quadratic equation for

which can be seen to depend on the quantities

is the natural frequency of the original system and is not adjusted in selecting the vibration absorber.

to eliminate the vibrations of the original system. The quantity

, however, is a parameter that can be adjusted when selecting a vibration absorber.

To illustrate the effect that

has on the natural frequencies of the combined system, consider the case in which a vibration absorber is to be added to a system originally operating at resonance (i.e.

is chosen to be

, if the forcing frequency is slightly different (for whatever reason) the combined system could once again be in a resonance situation. The presence of the vibration absorber in such situations could potentially make things worse compared to the original system.

in this situation. As can be seen, as the mass ratio

). In other situations the results will be different, but the same principles apply. Equation (8.45) can be used to find the resulting natural frequencies.

An industrial installation of process shakers shows a violent resonance when operated at 456 cycles/min. As a trial remedy, two 5 kg vibration absorbers are attached. The resulting system shows two natural frequencies occurring at 404 and 515 cycles/min.

Determine the number of vibration absorbers required to ensure that no resonance occurs between 350 and 600 cycles/min.

Determine the steady state response of the system shown below. Mass

moves on a smooth horizontal surface. and is connected to a moving surface through a spring with stiffness

. A pendulum of length

is attached to mass

which is a frictionless pin.