Transient Vibrations: Response of Spring–Mass System to a Step Function

As we have discussed so far, in many situations the long term (steady state) response of a vibrating system is of interest. For example, for a motor that will operate more than 99% of the time at a fixed operating speed we would typically want to investigate the response at that speed so an appropriate vibration isolation system could be designed.

On the other hand, there are times when it is the transient response of the system that is of interest.

In these situations, the loading isn’t periodic or is applied for a short period of time. We will look at the responses for some specific examples. We will limit ourselves generally to undamped systems for simplicity so that the general form of the equation of motion we are concerned with here is

is the disturbing force under consideration.

Response of Spring–Mass System to a Step Function

Consider a simple spring–mass system subjected to a rectangular step load as shown in Figure 7.1(a). We would like to find the response of the mass to this transient loading condition. Figure 7.1(b) shows the associated FBD/MAD. The equation of motion obtained using Newton’s laws is

As usual, the solution is composed of the homogeneous and particular solutions

For the RHS in (7.2), the particular solution is

so the total solution becomes

If we start with the initial conditions

the constants *Note that the total solution (including the particular solution) must be used to determine the arbitrary constants which arise from the homogeneous solution.* become

so that the total solution is 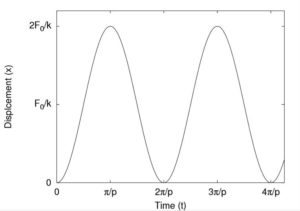 This response is illustrated in Figure 7.2. We can see that the maximum displacement of the mass is

which is twice the deflection that would have resulted if the load were applied statically. Now consider what happens if the step load is “turned off” at some time

. After this time, since there is no longer any applied force, the system undergoes free vibrations given by

need to be evaluated at the “initial” conditions (

) which depend on the time

at which the force was removed. The response of the mass while the step load is applied is given in equation (7.3). Similarly, the velocity of the mass during this period is, by differentiation,

Therefore, at the time

when the load is removed, the “initial” conditions are

which can be used to find

so the response in this case is

so the response in this case is

These responses are shown in Figure 7.3. As these responses clearly show, the transient nature of the applied loading can have a significant effect on the resulting response. 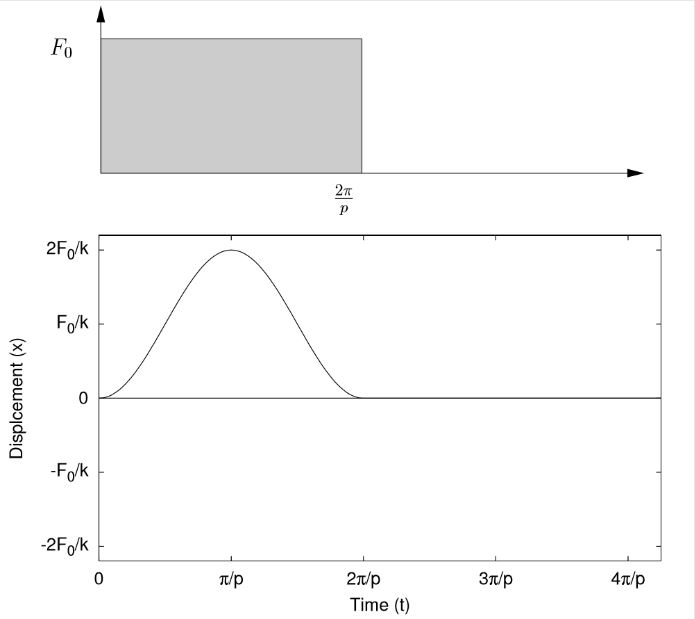 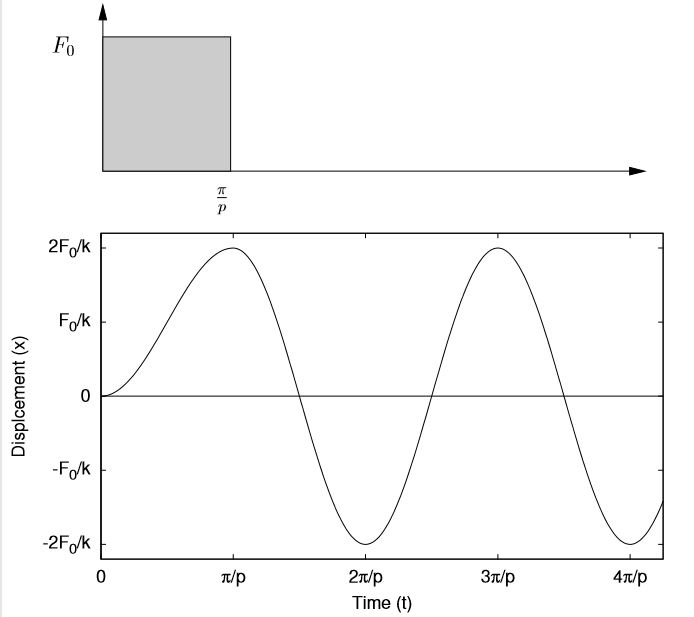 The previous responses can be understood on a physical basis. In the first case,

is applied to a system originally in its equilibrium position. When

is applied, the effect is to shift the new equilibrium position a distance 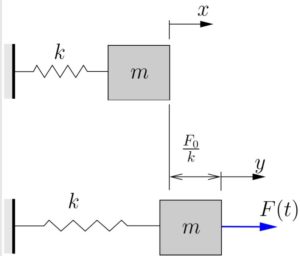 (immediately after the application of

and neglect both the applied force

and the new equilibrium stretch in the spring (as we did regularly when gravity was present), we then have a free vibration problem with the initial conditions

so the free vibration response is

The two cases shown in Figure 7.3 can be understood on similar principles. When the force

is removed, the equilibrium position of the system returns to its original position. The time at which the force

is removed determines the initial conditions for the subsequent free vibration problem, which leads to the responses shown.

Response of Spring–Mass System to an Impulse 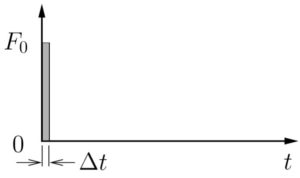 We now consider the response of a spring–mass system subjected to an impulsive loading shown in Figure 7.5. (Note that the quantity

is the area under the force-time curve and is known as the impulse applied to the system.) Here the time

at which the load is removed is small (

In such a case,

The “initial” conditions are approximately

so the initial conditions (after impulse has been applied) become

This response will play an important role later when we consider the method of convolution.

We can obtain this result another way by applying the basic principle of impulse and momentum for our system.

Figure 7.6 shows an impulse–momentum diagram for our simple spring mass system when the impulsive load is applied. The system is initially at rest and after the impulse has been applied has a resulting velocity

After the impulse is over, we have a free vibration problem with the initial conditions

The two constants are

We can also consider the response to some additional useful forcing functions.