We now consider the simplest damped vibrating system shown in Figure 3.1. This is similar to the system considered previously but a linear damper has been added. We will use

, the displacement from the equilibrium position, as the coordinate. A FBD for this system is shown as well. 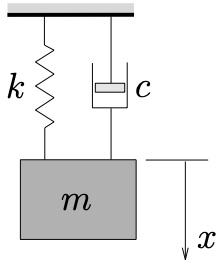 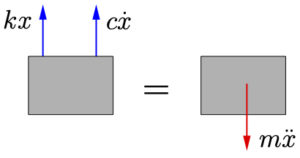 Applying Newton’s Laws we get

This governing equation of motion for this system is a linear, second order differential equation with constant coefficients. To solve it, we look for solutions of the form

Equation 3.2 is the characteristic equation that is used to determine the values of

Each of the roots

provides a solution to equation 3.1

and the total solution to

is a linear combination of the two solutions

(both of which can be complex numbers at this point) are to be determined from the initial conditions.

Note that the roots of the characteristic equation 3.3 involve a radical (square root)

If the term inside the square root changes sign from positive to negative, the square root goes from a real to a complex number. When this occurs we expect the nature of the solution in 3.4 to change as well. We define the critical damping constant (

) as the value of

for which the term under the square root sign is identically zero. For the system under consideration, this means

We now define the damping ratio (

With this definition we note in 3.3 that

, the roots of the characteristic equation in 3.3 can be written as

The general response of the system in 3.4 then becomes

which is a special case discussed later.)

The nature of the response depends on the value of

which represents the amount of damping in the system. If there is no damping,

and equation 3.8 simplifies to

which is the result obtained previously for undamped systems (equation 2.5).

In general there are three possible situations to consider:

We will consider each of these situations in turn.

The term in brackets

is similar to the response of the undamped system (3.9) which was discussed previously. Following the procedure used in the undamped situation, it can be shown that

As with the undamped case, this response represents harmonic motion except here the oscillations occur at a frequency of

instead of at the natural frequency

. (Note that this also means that the period for the damped vibrations is different as well.) Therefore the response in 3.10 can be written as

term indicates that the amplitude of the response will decay with time, which agrees with our everyday experience with damped systems. A typical response is shown in Figure 3.2. 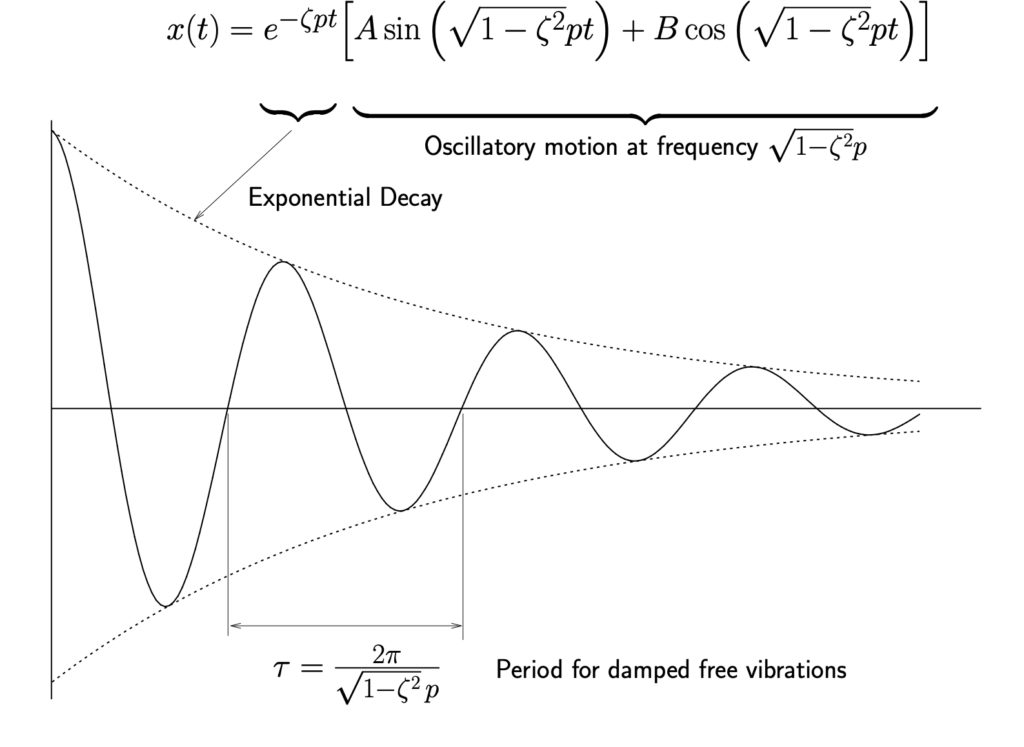 it can be shown that the constants in 3.11 become

so the complete response (for

A piston with mass 4.53~kg is traveling in a smooth tube with a velocity of 15.24~m/s and engages a spring and damper as shown. 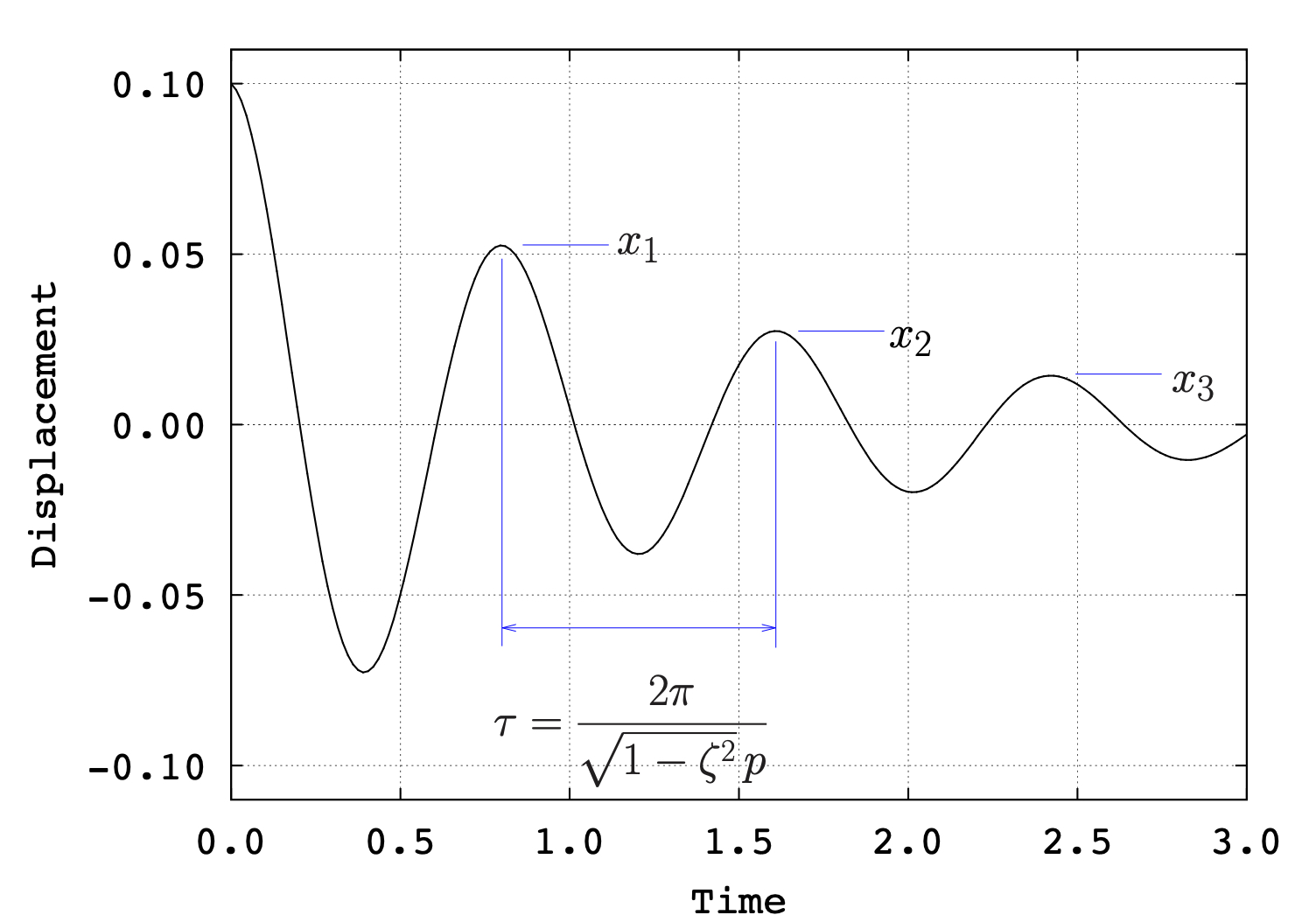 Figure 3.3: Ratios of successive peaks in an underdamped response

For an underdamped system, we can determine the damping ratio by considering the ratio of any two successive peaks in the response, such as

could be used equally as well.) Using 3.12 this ratio can be written

are times at which the peaks

occur respectively. Since these are peaks, these will occurs in the same part of the cycle (\ie the times

are separated by one period exactly) so that

is the period for damped oscillations given by

As a result, the

Taking the natural logarithm of both sides of this equations yields

and using the expression for the damped period in equation 3.15, 3.16 becomes

Note that for small damping values (

), a good approximation is

Finally, note that we can also apply this approach using peaks which are

in Figure 3.3 are two cycles apart for example). In this case the time between peaks is given by

Taking the natural logarithm of both sides and again using equation 3.15 for the damped period results in

can now be defined more generally as

which is identical to equation 3.18. As a result, equation 3.19 can again be used to determine the damping ratio

The following data are given for a vibrating system with viscous damping:

If the mass is given an initial displacement and then released, determine the logarithmic decrement and the ratio of any two successive amplitudes. 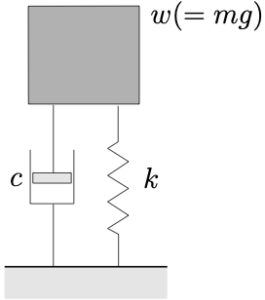 so in this case the roots of the characteristics equation in 3.7 are repeated

Since the roots are repeated, the solution to the governing equation requires the special form

Note that the response in equation 3.22 is not oscillatory, but due to the presence of the

term the response will eventually decay to zero. For certain values of the initial conditions there may be one zero crossing, but the amplitude will decay to zero before another is made.

will always be real, positive and smaller than

. As a result both of the roots in equation 3.7 will be real, negative and distinct and the response of the system is given by