Consider a system comprised of two masses and several springs as shown in Figure 8.1. This is a two degree of freedom system since two coordinates are required to completely specify the configuration of the system. One set of coordinates which can be used is

, measured from the equilibrium position, as shown. However, this is not the only set of coordinates which could be used. In fact, while

seem like a natural and logical choice, in some sense there is a better choice, for reasons to be discussed shortly.
Preliminary Physical Reasoning
Before finding the actual solution to this problem, consider two specific initial displacements from the equilibrium configuration as shown in Figure 8.2 and see what we can deduce about the resulting motion. In Figure 8.2,

are the initial displacements of the two masses. 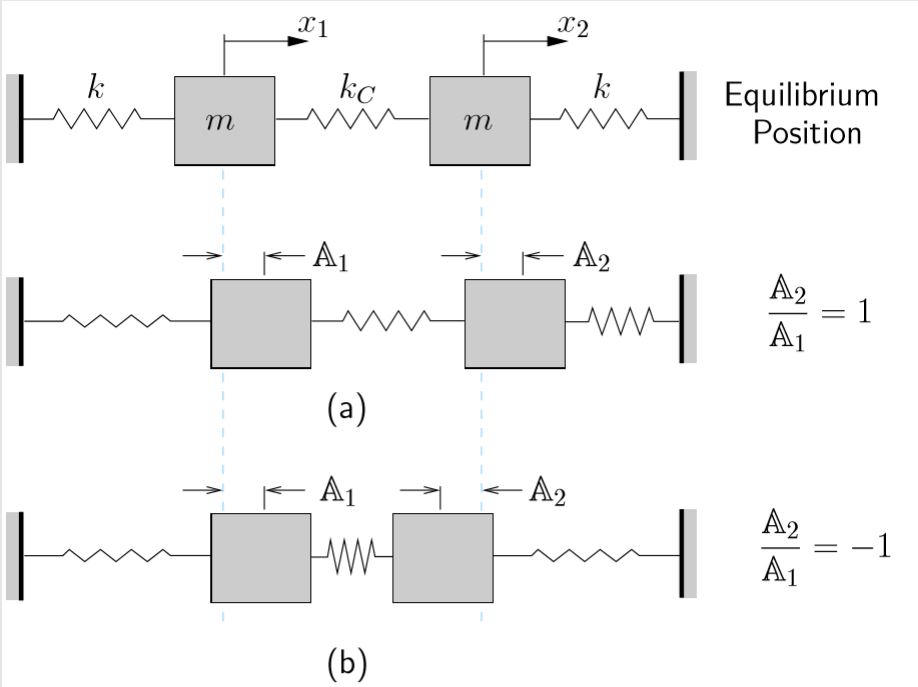 In case (a), both masses are displaced an equal amount in the same direction. In such a displacement, the central spring is neither stretched nor compressed (relative to its equilibrium length). Due to the symmetry in the system, both masses will undergo the same motion so that the distance between them will remain constant. The central spring remains completely undeformed in the resulting motion and applies no force on the masses. It therefore has no effect on the resulting motion (i.e. for this specific initial displacement, the motion of the system would be the same if the central spring were not present as shown in Figure 8.3.

As a result, we expect that if the masses are initially displaced with

and released from rest, the resulting motion would have

and the oscillations would occur at a frequency of

In the second case (b), the masses are again displaced by equal amounts but in opposite directions. The central spring will extend and compress in this case. However, due to the symmetry in the system, the midpoint of the central spring remains stationary and does not move to the left or the right. As a result, the system behaves as if this were a fixed point, so that in this case we can think of the system as equivalent to that shown in Figure 8.4.

The fixed boundary in Figure 8.4 has the same effect on the system as the stationary central point. Since one half of the middle spring appears in each system, the effective spring constant in each system is

(remember that, other factors being equal, shorter springs are stiffer). Each mass in Figure 8.4 therefore is supported by two springs in parallel so the effective stiffness of each system is

. As a result, we expect that if the masses are initially displaced with

and released from rest, the resulting motion would be such that

and the oscillations would occur at a frequency of

Having selected the coordinates (

, although it is not necessary to do so.
Figure 8.5 show the FBD/MAD for each of the masses in the system. 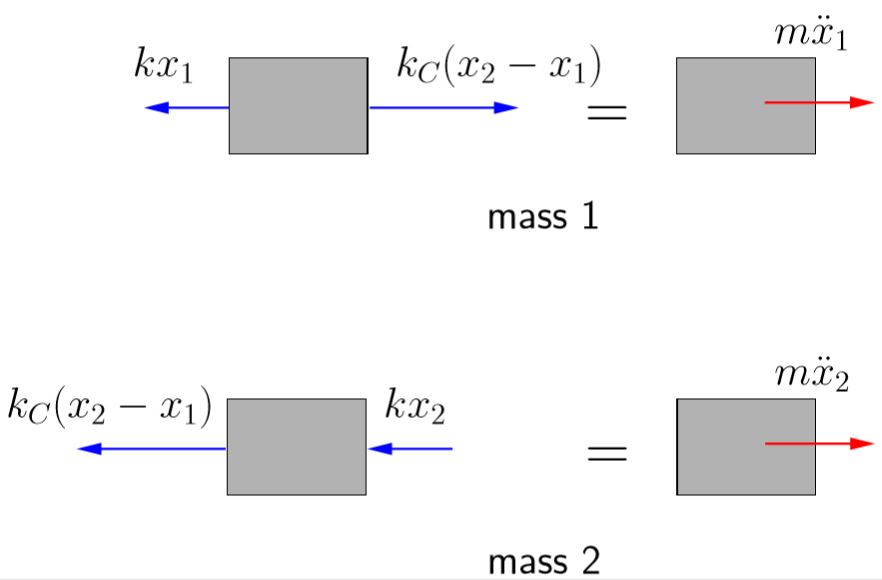 while for mass 2 we get

so that the two equations of motion for the system are

It will be convenient to write these equations in

, introducing the concept of

An important feature of these equations is that they are

appear in each of these equations. As a result it is not possible to solve either (8.1a) or (8.1b) independently. They must be solved as a pair.

Solution to Equations of Motion

To solve ve (8.2) we look for solutions in which both masses are undergoing harmonic motion at the same frequency (known as s simple simultaneous harmonic motion). We assume the motion of the masses is of the form

are the amplitudes of motion of masses 1 and 2 respectively. With this assumption we see that,

so the equations of motion become

which must be satisfied at all times

. The only way this can be true is if

There are two possibilities:

This is a result from linear algebra and is required for equation (8.4) to have a non-trivial solution.

This is known as the

. %We can solve this equation to get two values for

.
The two roots are

Equation {8.6) gives us the two natural frequencies for our two degree of freedom system. While the numbering of these frequencies is essentially arbitrary, it is customary to number them from lowest to highest. Therefore

is understood to be lowest natural frequency of the system. This is also referred to as the

. A two degree of freedom system will therefore have two modes of vibration.

Note that for our two degree of freedom system we obtained a second order polynomial (quadratic) characteristic equation from which we have found two natural frequencies. In general, if we have an

degree of freedom system, we will find

equations of motion. The solution of these leads to an

order polynomial characteristic equation from which we can find

Having found the natural frequencies, we would like to determine the amplitudes

that occur in each mode. To do so we again consider equation (8.4)

Since we have now found the two natural frequencies, we can use these in turn to find

. However, we cannot simply substitute the values of

(that was the condition we used to find these natural frequencies originally).

Since the square matrix equation (8.4) will be singular, we cannot solve for

uniquely. However, we can find a ratio between

. To see this, consider the first natural frequency

. Substituting this value into equation (8.4) gives

The first of these equations gives

which shows that it does not matter which of the equations in (8.4) is used.
Now consider the second natural frequency

. Substituting this result into equation (8.4) gives

The first of these equations gives

as before.
Therefore as we can see, there is a

of the amplitudes of motion of the two masses when they are vibrating at one of the system’s natural frequencies. We have also shown that either of the equations in equation (8.4) can be used to determine this amplitude ratio.

In summary, we have shown that for this system

represent the ratio of the amplitudes of the masses when they execute simple simultaneous harmonic motion at the first and second natural frequencies respectively. These do not determine the values of

uniquely, only their ratio. These are known as the

.
To use this information effectively, typically one of the amplitudes in the system is arbitrarily assigned a value of 1. The magnitude of the other amplitude can then be uniquely determined using the appropriate ratio. For example, if we arbitrarily assign

For the second natural frequency (i.e. in the second mode), equation (8.10) gives

We can represent these results as

With these results, the response of the system in each of the first and second modes as given in \eref{eq:AssumedSolution} can be written as

are known as the first and second

respectively. These are also referred to as the

modes of the system. Often, these mode shapes are normalized so that they represent a unit vector. We could then equivalently write them as

As we have seen there are several ways that the mode shapes can be expressed. Each of these is correct, although in this course we will most often use the form in equation (8.12). What is important is that that the ratio of the amplitudes in any given mode is as given in equations (8.7) and (8.8).

Normal modes can be used to conveniently express the response of the system. We have found two natural frequencies which each satisfy the equations of motion. For each of these frequencies there is an associated mode shape. Since the governing differential equations (8.2) are linear, the total solution can be expressed as a

of these two solutions

represent the actual amplitude of the motion of mass 1 in the first and second modes respectively, which will depend on the initial conditions as we will discuss shortly. Note that equation (8.14) simply represents two equations

It can be verified by direct substitution that these equations are indeed the solutions to the equations of motion.
There are four

of each mode is present in the response while

represent the relative phase angle of each of the modes. Note that the equations in (8.14) can be rewritten as

are now the four arbitrary constants. These quantities are determined by the

which can be solved to find

and substituting the above initial conditions leads to

which can again be solved to find

As a result, the total response then becomes

To see how we can use these results, consider the two specific sets of initial conditions considered previously:

This highlights a general result, but a very important one. The response of a multiple degree of freedom linear system will

be a linear combination of the normal mode responses of the system, with each mode responding at its associated natural frequency. The amount (amplitude) of each mode and the corresponding phase angle are determined solely by the initial conditions. This is the fundamental idea behind the approach known as

. As we have seen above, if a system is started in one of its modes (both position and velocity must satisfy these conditions) then it will vibrate purely in that mode. If the initial conditions do not start the system in one of its modes, then the response will in general be a combination of the modes in the system.
These results completely agree with (and generalize) the previous results we predicted for certain special situations based on purely physical reasoning. Of course, the mathematical approach outlined here will usually be required when the systems become more complex.

Beating is a phenomenon that occurs in MDOF systems when natural frequencies are “close” to each other. To see this, consider the simple \tdof system we have been investigating with initial conditions such that only one mass is displaced from the equilibrium position and released from rest

so the response will be

Using appropriate trigonometric identities, these can equivalently be rewritten

Now, if the two natural frequencies are close to each other, we can interpret these motions as vibrations occurring at a frequency of

with an amplitude that varies slowly at a frequency

. We can define the

Figure 8.6 illustrates this response of the two masses with

so that in this case 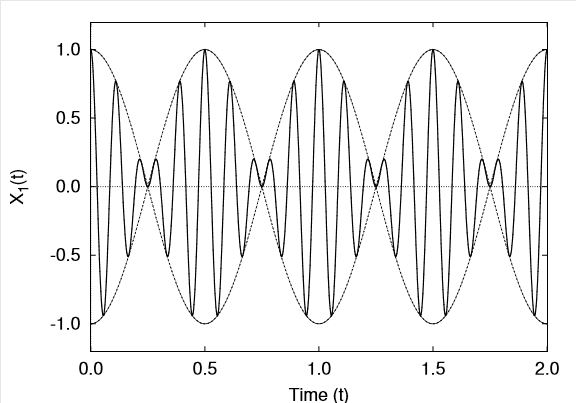 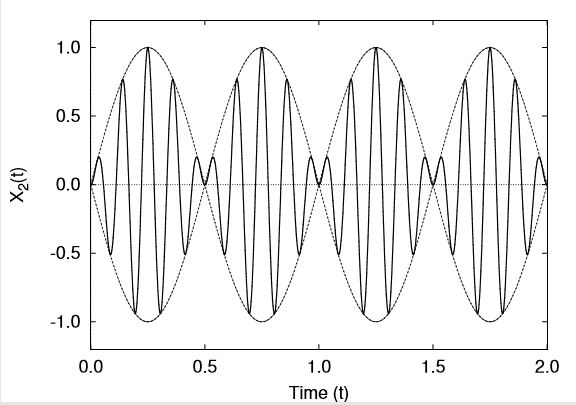 Note that in the beating response, there is a transfer of energy between the two masses. As can be seen in Figure (8.6), when mass 1 is vibrating with a maximum amplitude, the amplitude of mass 2 is small so that mass 1 has a large kinetic energy while mass 2 has almost none. One half of a beating period later the situation is reversed and mass 2 will have a large kinetic energy while mass 1 will have very little. Note further that since the system under consideration is

, the total mechanical energy remains constant at all times