(b) FBD/MAD of infinitesimal element
Figure 10.4: Axial vibrations of a uniform bar

Consider a uniform bar shown in Figure 10.4(a) which has a length

measure the axial deformation of the material located at position

in the equilibrium position. A FBD/MAD of an infinitesimal element of the beam is shown in Figure 10.4(b). Applying Newton’s Laws we get

For a linear elastic material

is Young’s modulus and

is the axial strain given by

For small deformations we can make the approximation that

The equation of motion then becomes

We recognize 10.19 once again as the wave equation. In this case

is the speed of the axial waves traveling along the beam as opposed to the transverse motions for the cable seen previously.

Solution for the Axial Response of the Beam

Following our previous solution procedure for cables, we assume a solution of the form

As a result the total solution for the axial motions becomes

Once again the constants

are determined from the boundary conditions while

are subsequently determined from the initial conditions.

Some common boundary conditions for axial motions of beams are illustrated in Figure 10.5. The results for some common beam configurations are shown in Table 10.2. The procedure to find these results is the same as was followed for the vibrating cable considered earlier. 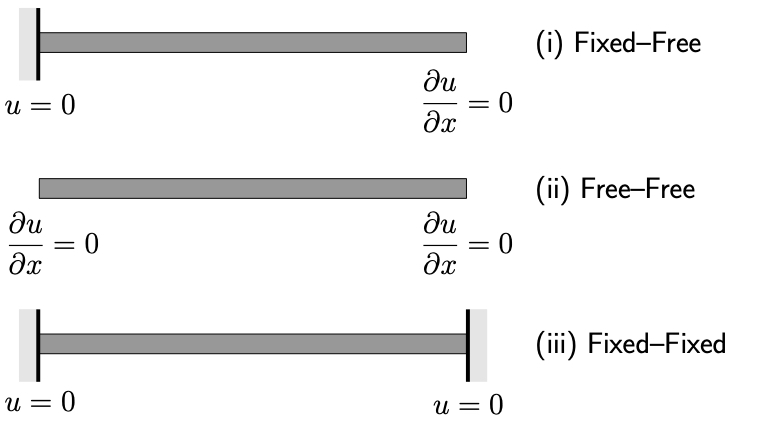