The vibrations we have considered so far have all been free vibrations in which the system oscillates on its own without the presence of any external forces. One of the most important features of such systems is that they possess a natural frequency at which these free vibrations occur.

magnitude of the forcing function (N),

= frequency of the forcing function (rad/s).

is the displacement from the static equilibrium position so we ignore the effect of gravity and the static stretch in the spring.) Applying Newton’s Laws the equation of motion for this system is

is the homogeneous solution to the equation

is the natural frequency given by

are arbitrary constants. (Note that the natural frequency of a system does not change if a load is applied).

Substituting these into 4.1 results in

Therefore the particular solution is

Substituting 4.3 and 4.4 into equation 4.2 gives the total solution for the response of the system as

Note the following characteristics of the two parts of the solution.

As discussed in the free vibration situation, the homogeneous response will eventually dissipate due to any damping in the system. Since all real systems have some damping, if we are only interested in the long term steady state response of the system we are often motivated to simply ignore the transient part of the solution and consider only the steady state response. This will not be a valid assumption early in the motion (i.e. shortly after the forcing function has been applied), but after a certain amount of time it will come to represent the true motion more appropriately.

Note that there is a bit of an inconsistency here in that we are neglecting the transient response because of damping in the system, but we started out by ignoring the damping in our original model. Once again, our motivation for doing so it that all real systems have some damping so the transient solution will disappear, whatever our model predicts. For lightly damped systems, an undamped model is both reasonable and simpler to use. It will simply take longer for the transient response to damp out. We will discuss forced damped systems eventually.

For now we wish to focus on the long term response of the system, so we will consider the total solution to be simply the steady state part of the motion

which is conveniently rewritten as

We see that the amplitude of the response can be considered as a product of two terms:

This is the static defection that the system would undergo if a force with the magnitude of the forcing function were applied statically.

This term accounts for the dynamic nature of the application of the force. The absolute value of this term is called the Dynamic Magnification Factor (DMF). This term determines how much the amplitude of the static deflection is magnified due to the harmonic nature of the force being applied. Note that this term can be positive or negative.

In terms of just the magnitude, we can see that

As can be seen in these figures, as

which is the static case. As

, the amplitude of the response increases and approaches infinity. This situation, forcing a system at its natural frequency, is termed resonance and as can be seen leads to very large amplitudes of vibration. As

gets large, the dynamic magnification factor approaches zero. For

, the amplitude of the response is less than the static deflection.

The tool below demonstrates the response for different values of

. Use the slider to set the frequency ratio and press the play button to visualize the response.

If we now consider the sign of the response in equation 4.6, we see that it is positive when

. This result means that for

is at a maximum value (

) when the forcing function is at a maximum value (

is at a minimum value (

) when the forcing function is at a minimum (

, the opposite situation occurs.

is at a minimum value (

) when the forcing function is at a maximum value (

) when the forcing function is at a minimum (

). These situations are illustrated in Figure 4.3 below.

We say that when

radians or completely out–of–phase). Another way to see this is to consider the response written in the form

is the magnitude of the response and

in this case). For

, so the forcing function and the response are in phase (

) and the response can be written as

we could write the response

where we can see that the phase angle is now

radians (or 180°) which corresponds to a completely out-of-phase response. A plot of the phase angle

as a function of the frequency ratio

We will revisit this relationship when we consider the damped situation.

To decrease this excessive vibration, it is proposed to add a concrete slab under the fan to increase the mass of the system. Assuming the concrete slab doubles the effective mass,

The response of the system when it is forced at its natural frequency requires special treatment. If fact most of our results so far are not valid at the resonance condition

. The problem is with the choice of particular solution. At resonance, the governing equation of motion becomes

where we note that the forcing function is now at the natural frequency. The homogeneous solution to this equation does not change

so the total solution will be written

At this point, however, we cannot choose a particular solution of the form

as before because a

term already exists as part of the homogeneous solution. This occurs only at resonance. In this case we instead assume a particular solution of the form

in each term). Differentiating twice

and substituting into the equation of motion gives

so that the complete response for the resonance condition is

and the total response becomes

The presence of the

in front of the

Forced Vibrations Due to a Rotating Imbalance

A common cause of forced vibrations in machinery is a rotating imbalance, which is shown schematically in Figure 4.6.

Here a machine with total mass

is constrained to move in a vertical direction.

is a rotating mass (which is included in the total mass

that is rotating at a constant speed

. During the resulting motion the machine body (the part that is not the eccentric mass) vibrates vertically, with a position described by the cooordinate

as shown in Figure 4.6. The total vertical displacement of the eccentric mass is therefore

Figure 4.7 shows a FBD/MAD for this situation.

This is the same equation of motion we obtained previously (equation 4.1) with

is either 0° or 180° depending on if the system is operating below or above resonance as discussed previously. Note however that since

equation 4.11 can be rearranged to give

This result, shown in Figure 4.8, is useful since it explicitly shows the parameters of interest, typically

. There is no information here that is not available in 4.7 provided one uses

. The form shown here is can be easier to use in some situations.

At these speeds the center of mass of the system remains approximately stationary. In a typical situation,

so in essence the machine body remains approximately stationary. To see this, consider the specific instant when the eccentric mass is at its highest point relative to the machine body. Since

, the response is out-of-phase and the machine body will be displaced downwards a distance

at this point, so the eccentric mass will have a net vertical displacement upwards of

. The center of mass of the machine

, relative to the equilibrium position is given by

So far we have considered the case in which a harmonic force is applied to the spring–mass system directly. A similar situation occurs when the \emph{base} supporting the spring undergoes harmonic motion, driven by some external force.

This is the same equation of motion we obtained previously in the forced situation (equation 4.1) with

As a result all of our previous results are applicable in this case as well. For example, the particular solution is

based on 4.6. In this case, the static deflection, previously shown to be

which physically is the deflection the mass would undergo if the base were displaced quasi-statically. Similarly, the dynamic magnification factor we discussed previously now accounts for the effect of the base moving dynamically.

A vibrometer is a device used (unsurprisingly) to measure vibrations. A simple model of a vibrometer is shown below in which the device consists of a simple spring–mass system attached to the structure to be measured. A recording device within the vibrometer measures the relative motion

between the structure and the vibrometer mass.

will be within 2% of the structure’s true motion amplitude

For a simple spring–mass system in Figure 4.1 acted upon by a harmonic force, the maximum disturbing force is

The maximum force transmitted to the structure is then

Therefore the transmissibility is

In the case of the simple spring–mass system the transmissibility is the same as the dynamic magnification factor as shown in Figure 4.2(b).

We can also consider transmissibility in the case of base excitation as illustrated in Figure 4.9. In this case we consider the maximum disturbing force to be

However, the steady state response of the mass in this situation has already been determined (equation 4.14) to be

As a result, the force transmitted to the support is therefore

The maximum force is therefore 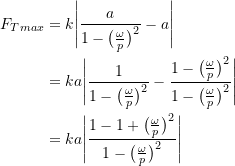 and the transmissibility is then

When an industrial machine with a mass of 450 kg was supported by springs (with negligible damping) it was found that the resulting static deflection was 5 mm. While the machine is running it is forced by a sinusoidally varying forcing function at a frequency of 1200 RPM.

(a) What portion of the force acting on the machine is transmitted to the floor?

(b) If the machine is instead mounted on a 1125 kg concrete block, what portion of the force acting on the machine would be transmitted to the floor? What is the ratio of the amplitude of vibration now compared to before the concrete block was added?

(c) If in addition to the concrete block stiffer springs

are used so that the static deflection is again 5 mm, what is the force transmissibility? What is the ratio of the amplitude of vibration compared to the original value?