To understand and quantify noise, we need to know about both the pressure levels involved as well as the frequency characteristics. The frequency is important for a number of reasons:

The human hearing range is between approximately 20 HZ and 20 000 HZ. As opposed to the decibel (logarithmic) scale used when dealing with sound pressures, a geometric scale is typically used when dealing with frequencies. In this approach, the audio spectrum is broken down into a number of convenient bands and the acoustic energy in each band is used. There are many types of frequency bands, but they share some common features.

A frequency band is defined by a lower frequency (

) and an upper frequency (

). The bandwidth associated with a particular frequency band is simply the difference between the upper and lower frequencies

, however, the term center frequency is commonly used.

The relationship between the upper and lower frequencies for each band follows a common rule, typically

where the value of

determines the type of band used. More generally, for the

This is illustrated for four bands schematically in 12.10.

Figure 12.10: Illustration of relationship between bands and frequencies

As a result, the center frequency for each band becomes

Similarly we find that

Therefore, the bandwidth is

As can be seen, for a given

, the bandwidth for any given band is a fixed percentage of the center frequency for that band. As a result, these types of bands are often referred to as percentage bands.

There are also systems which break up the frequency spectrum into bands with constant bandwidth. These are known as narrow bands. FFT analyzers fall into this category. These approaches are however not yet as standardized as the percentage band approach. 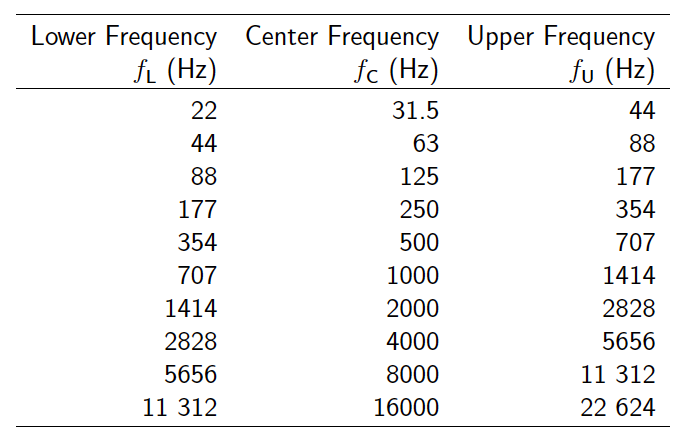 so that the upper frequency is twice the lower one. These bands are known as octave bands. We also find from 12.49 that

so that the bandwidth is approximately 71% of the center frequency.

Most work with octave bands uses a standardized set of bands which are shown in Table 12.5. Note once again that each band is typically named after its center frequency, so we could talk about the 1000 HZ band, for example, which would include all frequencies between 707 and 1414 HZ. Characterizing noise in terms of octave bands is the crudest form of analysis. More refinement can be obtained by using fractional octave bands.

For one-third octave bands, we set

so that the upper frequency is only 26\% larger than the lower. In terms of the center frequency we find that

so that the bandwidth is

which is approximately 23% of the center frequency. The standard one-third octave bands commonly used are shown in Table 12.6. 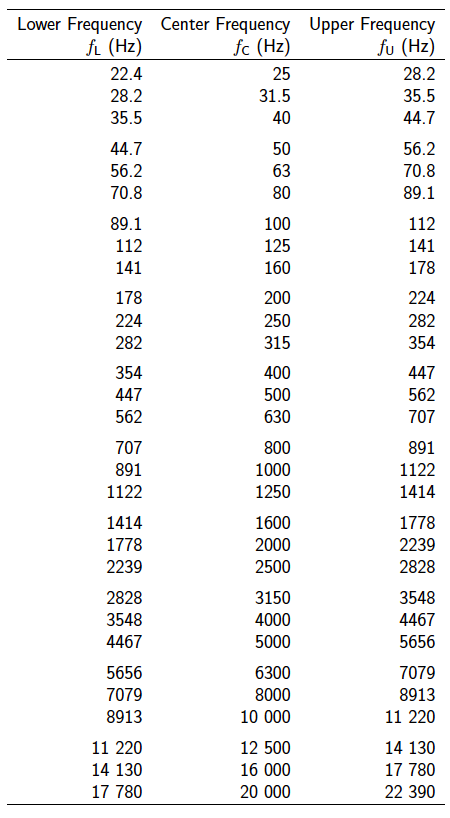 The octave band sound pressure levels for a centrifugal fan measured at 3~m are shown below.