In some systems the techniques shown so far do not work without modification. These occur when the system as a whole can move as a rigid body as well as vibrate. Such systems are known as semi-definite systems. They are also called degenerate or unrestrained systems.

An example of such a system is shown in Figure 8.9. This could be a model of two train cars joined on a railway track for example.

Figure 8.10 shows the FBD/MAD’s for the masses

. The equation of motion for mass 1 is

while for mass~2 we get

In matrix form these become

For a non-trivial solution we require the determinant to be zero, i.e.

which has the roots

The zero natural frequency corresponds to rigid body motion of the system. (Since the frequency is zero, the period is infinite indicating that vibrations do not occur – the system never returns to its starting point). To understand this further we can investigate the mode shapes associated with each of these frequencies. From the first equation in (8.30) we find

The first mode shape corresponds to rigid body motion of the system. Since both cars are always displaced the same distance in the same direction, there will be no distortion of the spring. With no stretch in the spring, the equations of motion simplify to

which have the general solutions

If the system is started with these conditions, then the cars will simply move as a rigid body at constant velocity (i.e. no vibrations will occur as the spring has no effect at all).

For the second mode shape we see that the masses will move in opposite directions with the relative amplitudes depending on the ratio of the two masses. If

, mass 1 will have a greater amplitude of motion than mass 2 and vice versa. In this mode there will be a point on the spring that does not move. This point, referred to as a node will be located a fraction

the distance along the spring from mass 1 as shown in Figure 8.11. If

, this point will be closer to mass 1. As we have seen previously, for a system vibrating in this mode, this point which does not move is equivalent to a fixed support so we could interpret this as two independent single degree of freedom systems, each with a frequency of

as illustrated in Figure 8.11. 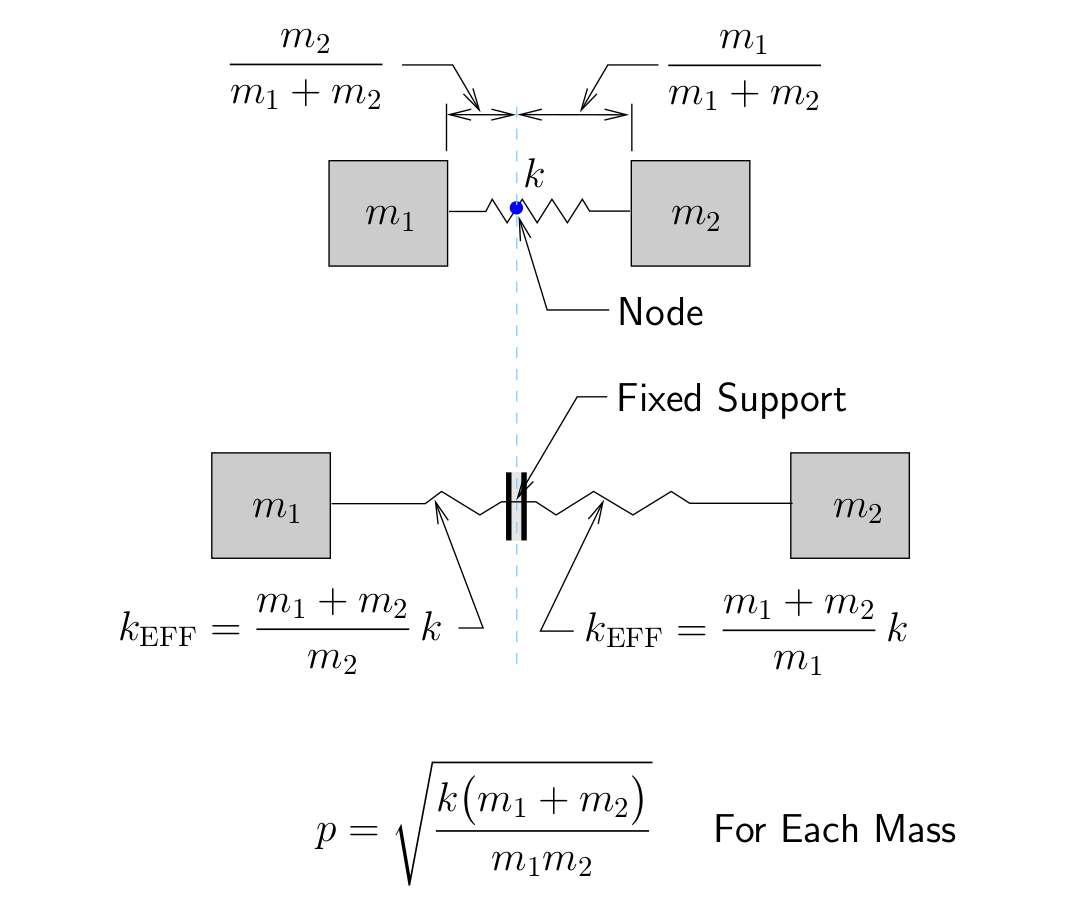 Note that for semi-definite systems: