Consider a beam, shown in Figure 10.6(a) which has a length

which is acted upon by a distributed load

(per unit length) acting laterally along the beam. Let

measure the lateral deflection of the beam and assume that only small deformations occur. Figure 10.6(b) shows the FBD/MAD for an infinitesimal element of the beam with mass

. By applying Newton’s Law’s and considering moments about the left end of the element we find

As a first order approximation we can write that

so that the above becomes

which is a well known result from beam theory. In the vertical direction(For small motions, the shear forces act vertically to a first order approximation. The actual vertical components would be for example

can be obtained from the slope of the beam. However, for small motions,

is used here as the vertical component. A similar remark holds for the

term.) we then have

so the equation of motion becomes

This is the general equation which governs the lateral vibrations of beams. If we limit ourselves to only consider free vibrations of uniform beams (

is constant), the equation of motion reduces to

which can be written

Note that this is not the wave equation.

Solution To Equation of Motion

Again, since the LHS depends only on

and the RHS depends only on

and they must be equal for all values of

, both sides must be equal to a constant, which we call

This results in equations

Note for future reference that

order linear ODE with constant coefficients, we assume a solution of the form

The equation of motion then becomes

The four roots to this equation are

The total solution will be a linear combination of solutions, one for each of the above roots,

where each of the

may be complex. However, by using Euler’s identity

The advantage of expressing the solution as in 10.32 is that all of the terms involved are real(We see that

are complex conjugates, while 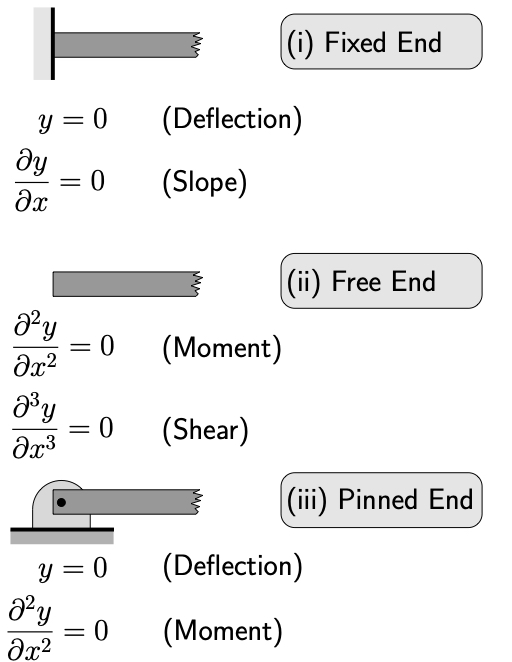 is fixed at one end and free at the other.

Determine expressions for the natural frequencies and associated mode shapes for this beam.

We have again found an infinite number of solutions which satisfy the equation of motion 10.26 given by

is the associated mode shape, both of which depend on the specific boundary conditions present. The general solution will then be a superposition of all of the solutions in 10.33,

can then be found from

This is once again beyond the scope of this course.