Dunkerley’s Formula is another method of estimating the lowest (fundamental) natural frequency of a system without having to solve an eigenvalue problem. Rather than using the stiffness matrix, Dunkerley’s Method makes use of the flexibility matrix

which is the inverse of the stiffness matrix.

Starting with the equations of motion for a general

and assuming simple simultaneous harmonic motion of the form

As we have seen previously, for a non-trivial solution to exist it is required that

For simplicity we will assume that the mass matrix is diagonal. In that case, the determinant in (9.10) has the form

Expanding (9.11) produces the characteristic equation which has the form

are constants (which will depend on

) which we do not need to consider here.

values are the roots, the characteristic equation could also be written in the form

are the same constants which appeared in (9.12). Comparing the

To this point no approximations have been made. Now however, we note that for many systems the higher natural frequencies are significantly larger than the fundamental natural frequency

As a result, ignoring all but the first term on the LHS of (9.15) results in

Note that as long as the mass matrix is diagonal, Equation (9.16)

can be written as

is the only mass in the system then

represents the deflection of the mass (in the positive i

coordinate direction) when a unit load is applied to the mass

(again in the positive i

coordinate direction). The effective stiffness of the (single degree of freedom) system is then

as defined above. This interpretation can be useful in applying Dunkerley’s Formula in some instances.

Estimate the fundamental natural frequency for the system shown below using Dunkerley’s Method.

Note that the stiffness matrix for this problem is

Note that for this system 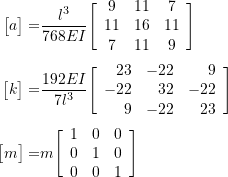 The ideas behind Dunkerley’s Formula, with a slightly different formulation, can also be used to estimate the highest natural frequency in a system. To see this start with (9.9)

This again requires, for non-trivial solutions,

If we again assume that the mass matrix is diagonal, then the inverse is simply

Expanding (9.18) produces a characteristic equation with the form

are again constants which depend on

roots of (9.19) correspond to the natural frequencies of the system given by

Once again, since these

are the same constants as in (9.19) Comparing the

is the largest natural frequency in the system, we ignore all of the other terms on the LHS of (9.22) to get

For the system shown below:

(a) Use Rayleigh’s quotient to find an upper bound to the lowest natural frequency. Use a trial vector of

(b) Use Dunkerley’s method to find a lower bound for the lowest natural frequency.

(c) Use Dunkerley’s method to find an upper bound for the highest natural frequency.

Note that for this problem, 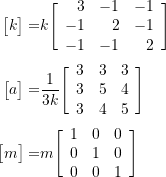