Vectors and their Operations: Scalars and vectors

Scalars and vectors are mathematical objects that are used to quantify physical quantities.

Scalar. A scalar is a real number. For example

Scalar quantity. A scalar quantity is a quantity that can be described by a single real number. This number specifies the magnitude or size of that quantity. For example length, angle, mass, speed, area, temperature, and pressure are scalar quantities.

The mathematical operations on scalars follow the usual rules of arithmetic.

Vector. A vector is a mathematical object that has a size (magnitude) and a direction. This definition perfectly fulfills the requirements of engineering mechanics. However, for a more rigorous mathematical definition click here.

The terms vector and vector quantity can be interchangeably used.

In this book, we distinguish between a vector and a scalar using special notations. The notation for a vector is a bold upper-case letter

or an upper-case letter with a symbolic overhead arrow

. By convention, the direction of the arrow is from left to right and it does not convey any information about the direction of the vector itself. Using an upper-case letter with a symbolic overhead arrow is recommended when writing notes, assignments, or exams. The magnitude of a vector is denoted by the vector notation embedded by two vertical lines

. The embedding vertical line notation is also used to denote the absolute value of a scalar, for example

is a real number. In some text the notation of vector magnitude is a double-vertical-line notation

and the absolute value of a scalar is shown by

is used for both cases. The double-vertical-line notation is reserved for a later use.

Applications: why are both magnitude and direction important?

Consider the stadium (BC Place) shown in Fig. 2.1. The stadium’s roof is held up by a series of cables arranged around the building’s perimeter. Engineers use statics to determine how much force (i.e. magnitude) each cable carries to hold up the weight of the roof along with additional forces caused by factors like wind and snow. Knowing the magnitude of forces in the cables allows engineers to determine how large the cables need to be to prevent them from snapping.

Cables are strong in tension (i.e. pulling forces) but are very weak in compression (i.e. pushing forces) so engineers need to not only know the magnitude of forces but also which direction they act. 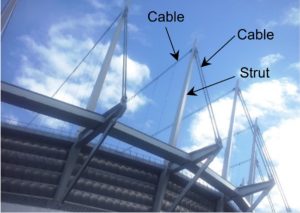 Prior to explaining the graphical representation of a vector, two geometrical objects, which are a line segment and a directed line segment, should be defined.

A graphical or geometrical representation of a vector is by a directed line segment or an arrow. An arrow has both a magnitude and a direction which are the properties defining a vector. Therefore, an arrow is a vector. To be more precise an arrow is a geometric vector.

The line that is collinear with an arrow is called the line of action. The orientation or direction of an arrow (its tail is already known or defined) with respect to a fixed axis is defined by an angle formed between the axis and the line of action of the arrow. Figure 2.2 shows a directed line segment or arrow representing the vector

Fig. 2.2 Geometric representation of a directed line segment (arrow) or a vector.

, is a vector of length zero. The zero vector does not point toward any direction, therefore, its direction is undefined.

It should be noted that a vector (directed line segment) is defined by only two parameters being magnitude and direction. Therefore, the position of a vector in the space does not change the properties. As a result, two vectors are equal if they have the same direction and magnitude. Examples of equal vectors are shown in Fig 2.3a.