In general, force is perceived as push or pull. Forces arise from different sources/causes like gravity, contact forces between bodies, pressure force by fluids on surface of solids, friction forces, electrostatic forces on charged particles, etc.

Physically, force has a magnitude and a direction in the space, and therefore, it is a vector quantity called the force vector. In this regard, the terms force and force vector are equivalent. Calculations regarding forces follow the concepts and methods presented in Chapter 2.

The SI unit of force is Newton (N). A force vector has the dimension

Denoting a force vector as

is the magnitude of the force and

is the unit vector expressing the direction of

has the unit of Newton, and the unit vector has no dimension and unit. Equation 3.1 readily implies that,

is a line that is collinear with the force vector (arrow representing the force).

can be resolved into its Cartesian components using the CVN,

are the scalar components.

A graphical representation of

in the Cartesian frame is shown in Fig. 3.1.

We say a body is subjected to a force (or a system of forces), or a force acts on a body. This expresses the fact that a force is acting or exerted at a particular location of the body. Therefore, the location at which a force vector is acting is deterministically important and not arbitrary. This is graphically demonstrated by drawing the force vector with its tail or head touching the point at which the force acts (Fig. 3.2a). Depending on the tail or the head of the vector touching the point, this representation may also imply a sense of pull or push by the force (Fig 3.2a).

Parallel forces. Two or more forces are called parallel if their line of actions are parallel. For example,

Concurrent forces. Two or more forces are called concurrent if their lines of action intersect at a common point. For example,

Remark: a force always accompanies a point at which the force is acting.

Concentrated force. In reality, forces are continuously distributed over areas. For example, we perceive and feel that the ground reaction force due to our weight is distributed on the soles of our feet; we do not feel a sharp feeling of a force there. In fact, all forces in nature are distributed, and there is no force concentrated at (or acting on) a point. However, we idealize or approximate a distributed force by a concentrated force. This idealization is performed when the area on which the load is distributed is relatively small compared to the size of the body.

be a system of

forces (set of forces), their resultant or the resultant force

is a vector sum over the forces (see Section 2.4),

The calculation procedure of resultants of forces can be presented separately for coplanar and spatial force systems.

being the axes of a Cartesian frame, a planar

is written in CVN as,

The the following equations hold for the magnitude, and scalar components of planar forces,

is the angle of

Note that a new notation for the magnitude of

(not its components) is defined as

being a non-bold capital letter. We will used

when denoting the magnitude of a planar force. This labeling approach applies to the two-dimensional calculation of any vectors for simplicity.

For a system of coplanar forces

, if each force is expressed in CVN as,

which is written in the following concise way,

Determine the resultant force of the cable forces shown in the figure. Obtain the force vector, its magnitude, and its direction measured from the positive x-axis shown.

A spatial system of forces, is a general force system with forces not necessarily lying in one plane. A spatial force

can be represented by three Cartesian components as formulated in Section 2.4.4. With x, y and z being the axes of a Cartesian frame,

is written in CVN as,

The following equations hold for the magnitude, and scalar components of the force,

are the coordinate direction angles as shown in Fig. 3.4.

of a system of spatial forces containing

expressed in CVN is,

A box beam is subjected to the forces as shown. Express each force in CVN and determine the magnitude and coordinate direction angles of the resultant force.

, the scalar components of

are determined and we write

The direction angles of

Force directed along a line

To determine a force directed along a line, we initially choose (or consider a given) a Cartesian coordinate system. Choosing a point as the coordinate system origin (if not given) is arbitrary, however, we should try to wisely choose a point that will simplify the calculations. Then, two points, say A and B, on the line of action or the object are identified. These are points with known coordinates or points that their coordinates are easy enough to calculate (Fig. 3.5). Considering the position vectors of A and B, we find the vector

is obtained by normalizing

by its magnitude (length),

, assuming AB is the direction of the force. Consequently, the force vector

can be written as,

As shown in Fig. 3.5, the graphical representation of

are collinear. Note that

has the dimension of force,

has the dimension of length, and the unit vector

has no dimension. Despite having different dimensions and units, all the vector quantities can be graphically shown in one Cartesian coordinate system (frame).

Determine the magnitude and coordinate direction angles of the resultant force.

The following position vectors are needed to determine the directions of the forces.

The forces are found as, 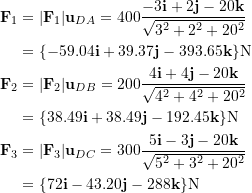 (the angls of the resultant force with

axes respectively) are, therefore, determined as,

Context: Force directed along a Line

Applications: Why is force along a line important?

The Port Mann Bridge between Surrey and Coquitlam (Vancouver area) opened in 2012 and has one of the longest spans of a cable stayed bridge in North America (470 m) (Fig. 3.6a). To support the roadway, dozens of steel cables connect to one of two large reinforced concrete towers.

Engineers need to consider how much force is carried in each cable to ensure that the tower is not excessively loaded on one side (which would cause the tower to bend or twist). Since each cable acts at a different angle, engineers used force along a line concepts to determine the force in each cable and evaluate if the tower is loaded evenly and ensure that no cables are overloaded (i.e. at risk of snapping). For added complexity, engineers also need to account for how the cables deform (i.e. stretch) when they are under load to ensure they share loads as designed. Deformations are discussed in future courses.

Note that cable stayed bridges are commonly mistaken as suspension bridges. In cable stayed bridges, cables are connected directly between the roadway and the supporting towers (Fig. 3.6b) while suspension bridges (e.g. Golden Gate Bridge) have relatively small vertical cables (‘suspenders’) that transfer loads (weight of road and the traffic) into large curved cables that rest on top of towers and are anchored (held) to the ground (usually via giant concrete anchorage blocks) at either end of the bridge.

The component of a force along an arbitrary axis can be determined using the dot product. Let

along l is denoted by

and determined by the orthogonal projection of

onto l. Using the dot product to formulate the orthogonal projection (see Chapter 2),

is the scalar component of

along the l axis. Therefore, we can write,

Consider the flagpole shown in the figure. The pole is 15 meters high and stabilized by a cable/rope as shown. Due to the wind, a tension force

with a magnitude of

develops in the cable. Determine the force developed along the pole.

onto the z axis.

i) Find the unit vector on z axis.

in in the opposite direction of

As in this example

coincidentally, we can write