A person intends to push on a stationary chest of drawers on the floor as shown. If the weight of the unit is 300N and the coefficient of static friction is

, determine the magnitude of the pushing force that will cause the impending slide of the unit.

Draw the FBD of the chest of drawers.

Note that the weight is applied at the geometric center (centroid) of the unit.

We need to check two cases: 1- impending slide, 2- tipping. The unit may tip before sliding, therefore, no sliding occurs at all. Note that only one of the two cases will happen.

Assume that the unit is about to slide.

Based on the FBD, we can write the equilibrium equations as,

Using Eq 1, the above equations become,

forming a system of equations that leads to,

The unit may tip about its bottom right corner; meaning that it rotates about the corner. At the onset of tipping, the corner of the unit is is the only surface in contact with the floor, therefore,

acts at the corner, i.e.

. The FBD of the unit at the onset of tipping is then,

At the onset of tipping, the moment equilibrium must be satisfied, therefore,

, the unit will slide rather than tipping.

. The coefficient of static friction between the unit and the ramp is

. Determine whether the sliding or tipping happens first when increasing the inclination angle slowly.

Draw the FBD of the unit.

and write the equations of equilibrium as,

, substituting this into the equilibrium equation for F_x and solving the system of two equations lead to,

We notice that the angle of repose,

, is equal to the angle of static friction.

To check for tipping, consider the onset of tipping at which the normal force acts at the corner of the unit as shown below.

with each other to determine the state of the motion of the unit.

, the unit will start sliding once the inclination angle reaches

Note that the magnitude of the weight of the unit was not needed to determine the slipping or tipping state of the box. The parameters directly affecting the state of the motion of the unit at a particular inclination angle are

(coefficient of static friction) for sliding, and the (ratio) of width to height of the unit for tipping.

Two blocks A and B, each having the same mass of 6kg, are connected by a linkage as shown. The structure is at rest. If the coefficients of static friction at the contact surfaces are

, determine the largest magnitude of the vertical force

Start with drawing the FBD of the whole structure.

The direction of the frictional forces are determined based on the potential motion/slide of the boxes as shown.

To tackle this problem, the FBDs of the pin C, and the two blocks are separately considered for writing three sets of equations of equilibrium.

Collecting all together, we have 6 equations,

Case 1: Assume that block A is in impending slide.

. Therefore, the system of equations becomes, 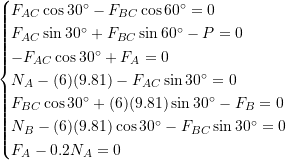 Solving the system of equation by substitution, we get,

Now, we need to check whether block B remains at rest or not.

Using Eqs. 5 and 6 obtained from the FBD of block B, we can write,

The maximum value that

, block B would slide before block A is at the onset of sliding (impending slide).

If we start with Case 2, instead of Case 1, we will have the following calculation.

Case 2: Assume that block B is in impending slide.

. Therefore, the system of equations becomes, 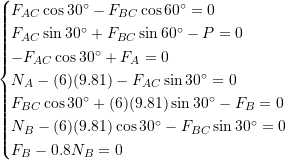 Solving the system of equation by substitution, we get,

Now, check the status of block A.

Using Eqs. 3 and 4 obtained from the FBD of block A, we can write,

The maximum value that

, block A will not slide.

Consequently, the structure is in static equilibrium under

with block B in impending slide and block A is not sliding.

Note: although we checked for the states of the motions of both blocks in each case, we just needed to calculate

in each case (either block A or block B in impending motion), without checking if the other block would slide under the calculated

. The answer to the problem would be the smallest