For dynamical systems excited by non-periodic forces, displacements, accelerations, etc., the response over the initial few periods of the system is termed transient response. This is important for many diverse situations including packaging of equipment, protecting people from automobile impacts, and loading of structures due to blasts and earthquakes. The modeling of these situations is often difficult and may require specific detail of the excitation as the response can vary dramatically depending on the detail of the input.

For a SDOF system the solution requires the general solution of

and becomes difficult for complicated

Consider first the undamped case for a step input:

and the total solution:

While this case is straightforward, the solution is more difficult with damping or for different forcing functions.

The response can be determined in a general form by considering

is shown. Consider what happens(response) if only this impulse is applied to the system:

using impulses/momentum relations so that from initial

(just before) to final

This impulses will result in a free vibration with initial conditions:

If this is the only impulse then the response is:

is the time since the impulse.

Therefore the response at

due to the impulse at

The response due to all the impulses from

is the superposition of all the impulses’ response.

i.e. the mass was stationary prior to

For the step input

If the initial conditions are

For a package being dropped or for an airplane landing, a SDOF model can be utilized.

For the undamped case, as it strikes,

, and the forcing function is

is not measured from the static equilibrium configuration. Using the general result:

Therefore, the maximum acceleration is:

In forensic studies of automobile collisions, the concern is the acceleration of a passenger’s head and the potential for internal damage. Assume the body/skull is modelled as a SDOF system.

. Assume the person weighs 160 lbs and falls 6 inches because of being unrestrained. Thus:

). What is the change in maximum acceleration?

The effective stiffness is now:

The cushion reduces the acceleration drastically.

For many situations, the support of the system is subjected to the motion specified by its displacement, velocity, or acceleration.

Therefore, for base acceleration:

The convolution integral for this case is:

The same approach can be used for a base excitation with velocity.

Note that the static solution is shown in the dashed lines.

Previously we developed a technique to find the response of a damped spring mass system to an arbitrary excitation. When the duration of the pulse is small compared to the natural period (

), the excitation is called a shock. It has been found that the concept of the shock response spectrum is useful for these situations.

The Shock Response Spectrum (SRS) is a plot of the maximum peak response of a SDOF oscillator as a function of the natural period of the oscillator. The maximum of the peaks (called maxima) represents only a single point on the time response curve.

If F(t) is a rectangular pulse of length

then during the pulse

. Often the results are determined for the two sections (during & after) individually then combined as the primary response (during) and the residual (after pulse) response.

, the maximum is the value at the time considered as it is still increasing therefore:

These results are called the primary values as they correspond to the result during the pulse.

and we find the maxima by differentiating

must be inserted into the original expression to find the maximum displacement. This will require 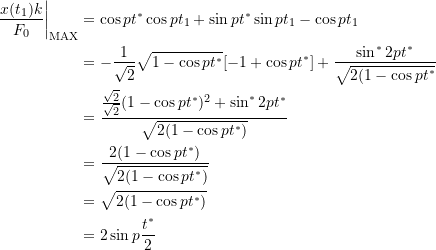 The total SRS can now be determined

If damping is added then the magnitude can be reduced considerably. However, the calculation of the SRS must be done numerically

, the overall maximum occurs after the pulse in the “free” vibration phase. As the pulse duration compared to the period becomes smaller we can approximate the response where it is the magnitude of the impulse(not the details of the shape) that matters. In the development of the theory, the response for a damped system was:

, and the maximum displacement is:

compared to the static response due to

If the effect of damping is included then:

we assume the maximum occurs at (or near) where

of a so-called damped period:

and we can multiply the undamped values by