We can use the Newtonian approach to find the stiffness matrix and equations of motion. However, we can also use influence coefficients for both the mass and stiffness matrices.

Consider the definition of stiffness and flexibility influence coefficients:

is the force (moment) required at coordinate

to maintain a unit linear (angular) displacement at coordinate

with all other coordinates held fixed at zero

is the linear (angular) displacement at coordinate

due to a unit force (moment) applied at coordinate

with all other coordinates free to move. 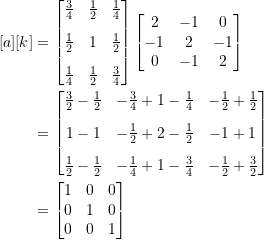 As an example of MDOF, consider a general planar situation which can be specialized to different industrial situations. Many of these problems can be initially modelled as SDOF ones, and then MDOF analysis will allow interpretations of the simplifying assumptions made.

NOTE: While the body shown is a rectangular shape, it can be any rigid body with a mass

and moment of inertia

to the plane through the center of gravity. The horizontal stiffness components, designated by

are most often just the lateral stiffness of the vertically mounted spring. For real springs, the lateral spring stiffness may be hard to find in the literature. For coil springs, it is often in the range of

First consider a unit displacement in the

Assuming all summations for

direction and moment equal to

This yields the same stiffness matrix.

The elements of the mass matrix,

can be determined through the use of inertia influence coefficients. They are defined as the set of impulses applied at the points (representing the coordinate directions)

respectively to produce a unit velocity at point

and zero velocity at every other point.

denotes an angular coordinate then

Thus for a multi-degree of freedom system, the total impulses at points