Up to the present we have formulated problems using newton’s laws in which the main disadvantage of this approach is that we must consider individual rigid body components and as a result, we must deal with interaction forces that we really have no interest in. These forces come from constraints which one part of the system puts on another.

An alternate approach referred to as analytical mechanics, consider the system as a whole and formulate the equations of motion starting from scalar quantities – the kinetic and potential energies and an expression of the virtual work associated with non-conservative forces. If relies heavily on the concept of virtual displacements.

e.g a point moving on the surface of a sphere of radius R with center

There are 3 coordinates and 1 equation of constraint. Therefore it has 2 DOF. If we used two angles, say

then we would not need the constraint.

These constraints are classified as:

If the constraint can be written in finite form (as above) they are called holonomic if not (then in differential form) then they are non-holonomic.

The work done during the motion is

where F & dr are vectors and

is a scalar. For a particle

may be the sum of several forces. Therefore,

where this is a true differential of the kinetic energy.

If the particle moves from positive

is term the potential energy.

The total energy is constant.

When we have a conservative system we can use Rayleigh’s to estimate the natural frequencies.

Consider a simple problem and use visual work to solve.

. What is the equilibrium position

and supported by a spring & dashpot as shown

determine the equation of motion.

We can use virtual work to calculate the energy in a multi-degree of freedom system.

For a displacement of

So for the combination (assuming superposition)

The work done by force

is energy stored due to that force:

If there are n forces and the displacements are 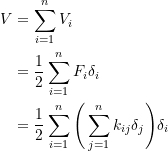 We can also show that the kinetic energy is

are examples of so-called quadratic forms. Quadratic forms are said to be positive definite if they are never negative and only zero when the variables are zero (

They are said to be positively semi-definite if they are never negative but can be zero for non-negative variables.

For example a submarine:

We will consider a system of

These are not true displacements but small variations in the so-called generalized coordinates. These are imagined displacements (slight variations) which are at the same time and which satisfy the constraints given by

Then for virtual changes in these coordinates:

Expanding this in a Taylor series gives:

So that there are

On each of these particles the forces acting are

Where the resultant force

is composed of the external forces

When all the particles are in static equilibrium

But because the rod is rigid

Therefore for the constraint forces

and the Principal of Virtual Work say

that the work performed by the applied forces through infinitesimal virtual displacements compatible with the constraints is zero. 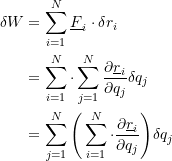 The generalized forces. These are not necessarily forces as they can be moments. It is only necessary that the quantity

has the units of work.

For the situation in which we have a conservative system the work can be expressed differently.

as we can select the virtual displacement arbitrarily (i.e. only one non-zero at a time)

has a stationary value at the equilibrium position (can use this for stability consideration). To extend this to dynamical situations we use D’Alembert’s principle.

are the inertia forces. The virtual work for a system of particles is:

and since we showed the virtual work of the interned forces is zero.

This is called the generalized D ‘Alembert’s principle and is really not useful as it is still in vector form. To get it in a scalar form we rewrite the second term in terms of any generalized coordinates and this leads to Lagrange’s equations of motion.

do not depend explicitly on time that.

now consider a virtual change in

Consider a typical term in the bracket:

Now interchange the order of differentiation in the last term.

As a result, the total second term becomes:

is the kinetic energy of the entire system. To complete the conversion, we must reunite the forces.

Some of the forces will be conservative (derivable from a potential

So that the rewritten D’Alembert’s principle becomes:

And since the displacements are arbitrary and independent.

However, since the potential energy does not depend on the velocities, this can be written as:

Find the equations of motion:

NOTE: Sometimes write the damping forces as a dissipation function.

Find the equations of motion:

The potential energy is:

And the damping force is the same. Note that:

The equation of motion comes from:

The uniform rod of length

carries a slider of mass

which is attached by a spring of stiffness

. The spring is unstretched at

The equilibrium positions are:

We could now study the stability of these configurations.

is the datum. Now we must find the generalized forces. For a virtual displacement

For a virtual displacement

For small angles these become:

If we have support motion instead of forcing,

then we cannot neccesairly use a potential, so now give the system a

as no work is done for

Now try a different set of generalized coordinates for the same problem.

If we consider small angles:

These are different values of ratios than in the first case. However, when plotted:

Now use the newtonain approach to the same problem:

Note both mass and stiffness matrices are non-symmetric!

Calculating the eigenvalues gives the same result and the mode shapes are identical with the other 2 formulations.

NOTE: These sets(first and third formulation) are linearly dependent.

and that the displacements are sufficiently small that the linear force- displacement and force-velocity relations hold. This means that the generalized coordinates are their time derivatives appear in the differential equations to only the first power. 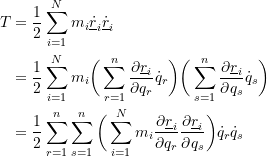 as the generalized masses.

Similarly we can write the potential energy as

and consider a Taylor expansion of V about the equilibrium configuration.

Where the partial derivatives are all evaluated at

As the equilibrium point is a condition in which:

are the stiffness coefficients. If we now use Lagrange’s equation the equations of motion become:

While this is very straightforward, we can use this result to obtain approximate formulations of the equations of motion as continuous systems it replaces them with a

degree of freedom system. It can also extend the technique to find approximate response to a specific forcing function. This is called the assumed modes method (AMM).

degree of freedom system. We can also easily extend it to a forced system.

Then the method assumes:

are trial functions and

are the generalized coordinates.

While for discrete systems

The potential energy can be determined is a similar manner.

This will allow calculation of a consistent mass and stiffness matrices.

What if we choose

So we have replace the system by:

The answer is dependent on the assumption of mode shape

EXAMPLE: Use static deflection as mode.

Add masses to the diagram

It is sometimes useful to consider these approximate solutions to finding the eigenvalues and eigenvectors. The UAMM gives upper bounds as do most techniques. We can get lower bounds as well.

Consider again the equations and motion.

To get to an eigenvalue problem we can do it in two ways.

either gives the same eigenvalues and equivalent eigenvectors.

One can use these to find the eigenvalues/vectors through matrix iteration.

One clever idea that gives a lower bound is Dunkerleys formula. Consider the Dynamic Matrix formulation

and expand the determinant of the coefficients

Now consider that we have the roots of this polynomial

. This equation is equivalent to (factored)

and expand this to get

However the largest term is the first one and often dominates

A special case occurs when the mass matrix is diagonal. Then tr D is

and we need calculate only

In this case there is a physical interpretation of the expressions

is the natural frequency of the system with only

as the mass (all other masses set to zero).

This is also sometimes shown as Dunkerley’s formula.

Consider an example of a continuous system

Therefore the eigenvalue problem is

The mode shape is

What if we apply some dynamic loading to the structure? Then we must calculate the generalized form for our model. Consider a virtual displacement 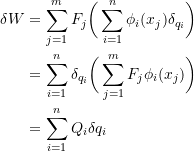 Rotating shafts tend to bow out at certain speeds and whirl in a complicated manner. Whirling is defined as the rotation of the bent shaft and the line of centers of the bearing. This phenomenon results from various causes as mass unbalance, hysteresis dangers, gyroscopic effects, fluid friction, etc. This whirling can take place in the same or opposite direction as that of the rotation of the shaft. The whirling speed may or may not be equal to the rotation speed.

Let us assume a simple system

is the stiffing of the system to lateral of flection.

and OS to be whirling at angular speed

These are nonlinear equations and there are more than one solution.

This looks exactly the same as rotating inbalance excitation

So that synchronous whirl occurs when

Almost all of the vibrations considered so far were either free or forced vibrations. A fundamentally different class are the so-called self-excited vibrations.

In a forced vibration the sustaining alternating force exists independently of the motion and persists even when the vibratory motion is stopped.