Review of single and multi-degree of freedom (mdof) systems: Applications of MDOF systems

The concept of modes and their corresponding natural frequencies is useful in understanding the behavior of lightly damped systems. Before adding the complication of damping to our models, we will consider several applications to industrial situations.

The model of the automobile shown is used to predict the low frequency modes of vibrations as these are responsible for the low frequency noise in the passenger compartment. Knowing these models can assist the designer in controlling them. In addition, it helps the designer in predicting the response of the frame to various inputs from road irregularities. As an initial estimate, the three modes of vibration of the vehicle may be considered as uncoupled. For the specific case below, the assumption of uncoupled modes is to be compared to the coupled model.

a) For the longitudinal model of the vehicle, specialize the equations of motion for the case of

and the radius of gyration on the vehicle about

are the same as 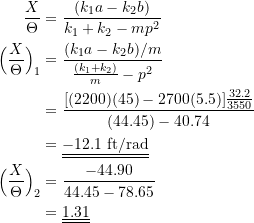 If we “uncoupled” the modes

If the horizontal stiffness,

, were the same as the vertical then the third frequency,

, would be the same as the vertical.

The assumption of uncoupling gives essentially the same answer.

The illustration shows the detail of the proposed isolation system for the reciprocating compressor and motor considered previously and modelled as a single dof system. The actual system does not have the center of gravity symmetrically located on the supporting structure and isolation springs. In situations like these the industrial installation guides recommend that the isolation springs be selected so that the vertical static deflection of all springs is the same. The reason stated is that this will tend to reduce the frequency of the “rocking motions”. This exercise is to investigate this idea as well as the differences found for the isolation of the system compared with the single degree approximation used earlier. More details of the installation are given below. The stiffnesses shown are representative of both springs at the ends of the supports with the lateral stiffnesses assumed to be equal to the vertical values.

(b) Under this assumption what happens to the equations of motion?

as the vertical mode is uncoupled from the other two

this uncoupling solves the natural frequencies

(c) Noting that the original had an operating speed of 1750 RPM and the original transmissibility was 1/15, calculate

for this installation assuming

The rotational mode can be calculated starting from a FBD

(f) Do the calculation using a program

The results show that because

is small compared to

that there is little difference. The “rotational” (

To lower it, the spacing of the supports would have to be reduced. For example if it were brought to 1/2 of original (5.1′ instead of a total of 10.4′) then the rotational natural frequency would be

It is obvious from this calculation that the rule of thumb should be that the spacing should be no more than twice the radius of gyration of the total mass!

a) Calculate the appropriate spring constant for each of four springs used to mount the washing machine to meet the specification for the transmissibility and select them from the enclosed table.

c) Using the size of the rotating wash cylinder estimate the unbalanced weight in the maximum load.

Therefore, each spring has

Therefore, SLF 412 and 413 would not meet the transmissibility spec.

Therefore slightly higher than at 950 RPM

Perhaps a wet hand towel out of balance

The commercial dryer was considered earlier under the assumption that the vibration was only a vertical mode. However the excitation die to rotating imbalance would cause excitation both horizontally and vertically that would excite coupled modes as well. As a result it is necessary to consider all the planar modes of vibration to investigate if they are near the excitation frequency. The diagram of the dryer is shown below. The lateral stiffness of the supporting springs is estimated to be 0.8 of the vertical stiffness. The excitation frequency is 950 rpm.

b) Determine if any of the modes are uncoupled. For the coupled modes derive the equations of motion for free vibration starting from Newton’s laws.

c) Calculate the natural frequencies and mode shapes for the dryer.

d) If the supports for the dryer were redesigned to make loading easier with h = 0 (as illustrated) what are the natural frequencies compared to the original design. How do they compare with the excitation frequency?

The vertical mode is uncoupled

Which matches the reduction of the general case where

has been replaced by

c) Calculate the natural frequencies and mode shapes for the dryer

The vertical mode is as previously

which is well below the excitation frequency of 950RPM (15.8Hz)

So far we have dealt with systems that have positive definite stiffness and mass matrices. This means the eigenvalues are positive & real. We can then define an orthonormal basic system. However consider the example

but the stiffness matrix is not positive definitive. It is singular. This is because one “natural frequency” is zero.

is called a zeroth mode

and the system is simply moving off in one direction, let’s suppose we set:

This is the constraint equation:

Where this expression says the momentum of the 3 masses must be zero. This essentially says this is a 2 DOF system.

Note: If we tried to find a flexibility matrix it is not defined.

We can write the constraint in a compound form as:

We can now solve the eigenvalue problem using

For the example above set

A second example of a 2DOF system is the vibration absorber as it can provide quite spectacular results when applied correctly. We will consider it first as a 2DOF undamped system, then include viscous damping. The closed form solution for the case of damping is much more involved.

Under the steady state assumption, the equations of motion become:

For use in vibration absorber applications, we define:

Then divide numerator and denominator by

, the response of the masses

It is seen that from

is stationary. This leads to the idea that the motion of

can theoretically be reduced to zero if we employ

at the operating frequency

. For this application. the subsystem

is called a vibration absorber and at the operating frequency:

For this application it is useful to modify

to reflect what we can call – the original system

Using those definitions show that

This shows that when the subsystem

is motionless as the force in the spring

to zero. Therefore, the natural frequencies are found

and the expression becomes:

If instead of the mass

being excited by the force

, the exication is through the base as

, what is the difference in the response of

, essentially determines the spread of the two resonances:

Therefore, the equations are identical except that

for the vibration absorber is:

so that at any time:

And the net dynamic force on

To solve the system with damping it is more advantageous to use complex numbers:

There are a number of special cases of the general forced damped analysis that are useful.

Consider a general damped system that can be specialized for special applications.

And we wish to find

There is a lot hidden in these symbols so we can consider some special cases.

If we look at our general solution then:

We are really interested in the amplitudes. Use the result that if:

We wish to write

We wish to find the optimum ratio

which minimizes this amplitude;

Therefore, the minimum amplitude for optimum

. To find the value of

, use this value of 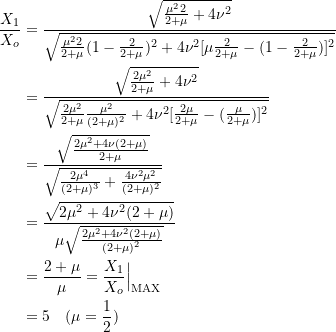 The amplitude at this value of

Now evaluate this for

From the general solution:

In order to apply this to various situations, it is useful to non-dimensionalize these relationships similar to that of the undamped vibration absorber.

As a result somewhere between

will give an optimal result.

Note that all the curves intersect at

. That is these points are independent of the damping. If we calculate their location, our problem is essentially solved as we must find the curve that passes through them with a horizontal tangent. Also by changing the “tuning”

the two points can be shifted up and down the

curve. We can do this until the two points have the same height and the horizontal tangent through one of them.

and this is independent when

while the positive gives

The two answers for the forcing frequency ratio are functions of

but not of the damping

We now wish to adjust

are equal. Since their magnitude is independent of the damping, chose

(the two roots), we want the same magnitude:

Now it is not necessary to solve for

if we remember the sum of the roots in a quadratic in the negative coefficient of the middle term.

Amplitudes of the main mass for various values of absorber damping. The absorber is twenty times as small as the main machine and is tuned to the same frequency. All curves pass through the fixed points

Resonance curves for the motion of the main mass fitted with the most favorably tuned vibration-absorber system of one-forth of the size of the main machine.

for various absorbers attached to the main mass. (b) Peak relative amplitudes between the masses

for various absorbers. (c) Damping constants required for the most favorable operation of the absorber,

and using one of the roots:

while the optimum damping is given by: