Review of single and multi-degree of freedom (mdof) systems: Complex Representation for Vibrations

When dealing with vibrating equations it is often more efficient to use complex numbers as they allow the phase relationships to be easily handled. To do this use the complex number:

is called the complex conjugate

is called a unit phasor. For fractional expressions we can rationalize the denominator to separate real & imaginary parts:

and we want to imaginary part of the solution

is defined as the mechanical impedence.

Then the imaginary part of the solution is:

We can now re-interpret equation

Each of the force terms above can be interpreted in their respective phases.

Many real automotive suspension systems use the so-called Macpherson strut which is a combined spring and damper along with a coil spring as shown in the diagram. The system can be represented by the diagram where the forcing function comes from road surface. (This system is sometimes called a 1 &

a) Using the mechanical impedance find that the displacement

b) For the model shown, determine the transmissibility of the system.

c) For the frequency ratio

. Calculate for the transmissibility and compare the values to the case in which

b) The force transmitted is 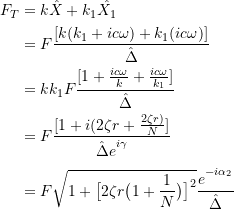 c) For the case

reduces the transmissivity in both cases, however it is most effective at higher