Variational Principles: The Principle of Minimum Potential Energy for Conservative Systems in Equilibrium

A conservative system is defined as a system whose energy function is independent of the path between different deformation configurations, while a conservative force is defined as a force that exerts the same work to move a particle between two fixed points independent of the path taken. A conservative system would generally be composed of an elastic body acted upon by conservative forces. Forces arising due to gravity are in general conservative forces. On the other hand, nonconservative systems are those that usually contain frictional forces or nonelastic materials. For such systems, energy is lost during loading cycles that return the material back to its original position. For systems composed of elastic bodies and external forces that are conservative in nature, it will be shown that, provided a certain restriction on the constitutive equations for the elastic body, the state of static equilibrium corresponds to the state of minimum potential energy for the system.

For the purpose of illustration, the differences between stable, neutral, and unstable equilibrium states are often depicted though the use of schematics, such as Figure 1. In the three cases shown in the figure, the equations of equilibrium (sum of vertical forces is equal to zero) are achieved when the small cylinder is at position

. In Figure 1a, any perturbation (small change) in the position of the cylinder from point

Figure 1. Types of equilibrium (a) Stable, (b) Neutral, and (c) Unstable equilibrium.

is applied is defined as follows:

is the elastic deformation (elastic strain) energy function per unit volume of the deformed configuration,

is the boundary traction vector, and

is the body forces vector.

.
If the continuum is made of a linear elastic isotropic material and if the deformations are small the potential energy of the system can be written as:

Notice that for small deformations, the integration is done over the undeformed configuration and the small strain tensor is used as the energy conjugate for the Cauchy stress.

is defined as follows:

is the displacement of the Euler Bernoulli beam’s neutral axis,

are the external point forces and moments,

are the displacements and rotations corresponding to

are the numbers of external point forces and moments, and

is the distributed lateral load on the beam.

For a small deformations beam under axial loading, the potential energy is defined as follows:

are the external forces and the corresponding displacements acting on the bar.

, and the corresponding equilibrium displacement vector field is

. We wish to show that a small variation in the displacement field

corresponds to a zero change in the potential energy. I.e.,

be the strain field associated with

, then, the potential energy associated with the displacement field

Using Equation 7 in the principle of virtual work we have:

be the equilibrium displacement of an Euler Bernoulli beam and let

be a variation of this equilibrium displacement associated and let

be the associated rotation. Therefore,

Using Equation 8 in the principle of virtual work we have:

i.e,. the potential energy of an Euler Bernoulli beam that is in equilibrium is stationary.

For the system to be in stable equilibrium, the left hand side has to be greater than zero at equilibrium. This imposes a severe mathematical restriction on the strain energy function

such that a stable equilibrium is always achieved; this mathematical restriction is called positive definiteness. Fortunately, for small deformations linear elastic materials, such condition is readily satisfied when the material constants follow the restrictions imposed on the elastic moduli. Recall that for the linear isotropic material law to be positive definite, Young’s modulus

and Poisson’s ratio have the following restrictions:

Similarly, if the external forces are not functions of the applied displacement, and setting

then the second variation of the potential energy of an Euler Bernoulli beam is given by:

, therefore, the equilibrium of an Euler Bernoulli beam under lateral loads with a positive Young’s modulus is always a stable equilibrium.

For linear elastic small deformations materials when the infinitesimal strain matrix is used as the strain measure, the positive definiteness of the internal energy is satisfied. The strain energy function

is quadratic, and thus, it is indeed convex in the variables

. For such materials, rigid body displacements (but not necessarily rotations!)
result in zero strain components and thus are not accompanied by a change in the internal energy. For linear elastic small deformations, the potential energy is indeed minimum at equilibrium when the infinitesimal strain matrix is used. It should also be noted that in the derivation in the previous section, the components

in the continuum potential energy were taken as gradients with respect to the deformed configuration coordinate system. However, the infinitesimal strain tensor is in fact defined as gradients with respect to the undeformed configuration coordinate system. For small deformations, the following approximation is traditionally used:

plus a matrix of small numbers

The principle of minimum potential energy for linear elastic small deformation materials is very successful in finding solutions for problems in solid mechanics engineering applications. However, the principle of minimum potential energy when the infinitesimal strain tensor is used can fail in predicting phenomena like buckling, since buckling involves large rotations. In this case, the use of the infinitesimal strain matrix is erroneous since it predicts nonzero values for the strain components when large rotations are encountered. These erroneous nonzero strain values can inhibit predicting certain types of mechanical behaviour accompanied by large rotations.

In large deformations, the expressions for the virtual work and the second derivative of the potential energy of the system are derived by defining

Phenomena like buckling, which are accompanied by large rotations without any change in the internal energy, can be modelled using the principle of virtual work since, during rotations, the terms

are all equal to zero since

(For pure rotation, the stretch rate

of the velocity gradient

is equal to zero). Constitutive models for large deformation hyperelastic materials are either given in terms of the principal stretches

. Such materials have a strain energy potential that is a function in the principal stretches

, and thus, large rotations are accompanied by zero strain energy. If the post-buckling behaviour is stable, then it can be predicted using the principle of minimum potential energy at equilibrium for a continuum with large deformations.

. It is also subjected to a moment of value 140N.m. Determine the possible equilibrium positions described by the angle

and determine whether they are stable or not. The spring has an unstretched length of 0.6m and a stiffness 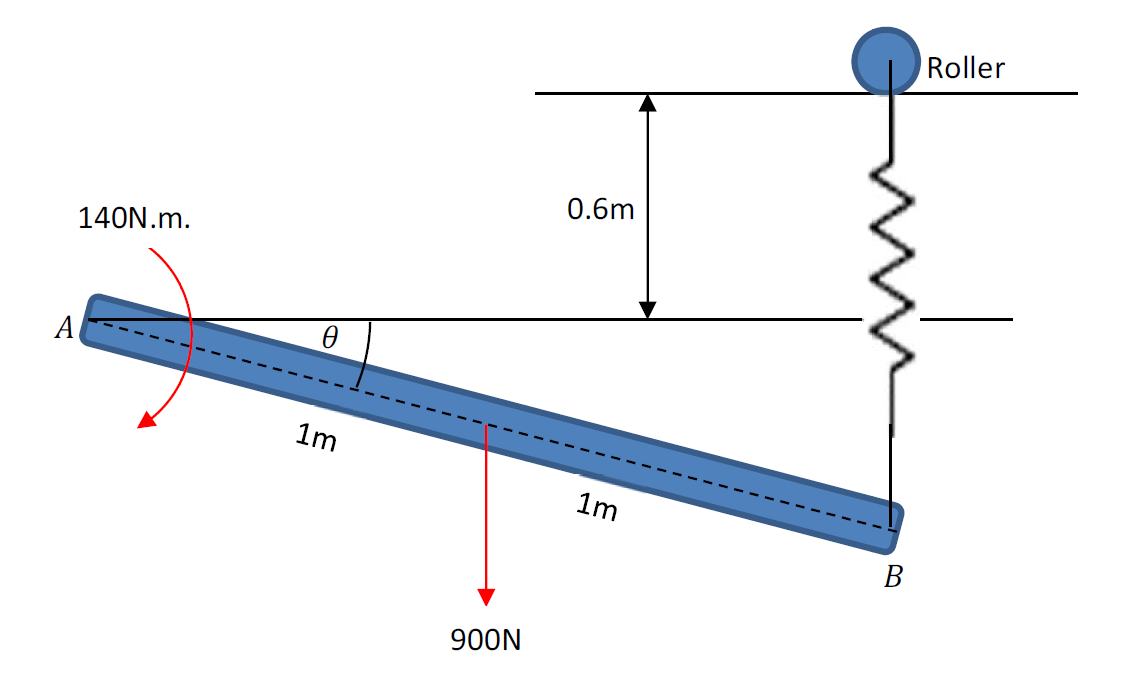 The equilibrium equation (sum of moments around point

Solving the above equation leads to four possible angles at which the rod is in equilibrium:

that would minimize the expression for the potential energy:

To find the equilibrium angle, the rate of change of the potential energy with respect to

is equated to zero:

By substituting the possible angles of equilibrium in the above equation we get:

is a stable equilibrium position.