The stress at a point inside a continuum is given by the stress matrix (units of MPa):

is to normalize it:

The traction vector (units of MPa) on the plane can simply be obtained using the formula:

The shear stress vector on

The directions of the principal stresses are the associated eigenvectors:

. The stress matrix will be diagonal in a coordinate system defined by

. The coordinate transformation matrix is:

The stress matrix (units of MPa) in the new coordinate system has the form:

The von Mises stresses (MPa) for both matrices are:

In fact, we can use Mathematica to show that both matrices represent the same state of stress, but at two different coordinate systems. The following code utilizes the diagonalization procedure for symmetric matrices. The eigenvalues and eigenvectors of the left matrix are obtained. Then, a transformation matrix is formed using the three normalized eigenvectors. The final matrix is shown to be exactly the right stress matrix above.
View Mathematica Code:

Create a function in Mathematica that returns the value of the von Mises stress of a general stress matrix.

The function shown in the code can be very helpful to quickly calculate the von Mises stress of a stress matrix using Mathematica.
View Mathematica Code:

A metal yields in a uniaxial state of stress when the uniaxial stress reaches 200MPa. Will the metal yield when the stress is described by the matrix (units of MPa):

If the material follows the Tresca yield criterion, the first step is to find

. Since in a uniaxial state, the metal will fail when the uniaxial stress reaches 200MPa, therefore:

The eigenvalues of the matrix describing the given state of stress are: 71.7MPa, -28.5MPa, and 21.8MPa. The maximum shear stress in this case is:

. In this case, and utilizing the von Mises stress expression as a function of the principal stresses:

Therefore, according to the von Mises yield criterion, the state of stress is well below yield.

of 3 MPa. The vessel’s average diameter is 2 m, and its thickness is 10mm. Find the von Mises stress at a point on the cylindrical wall. 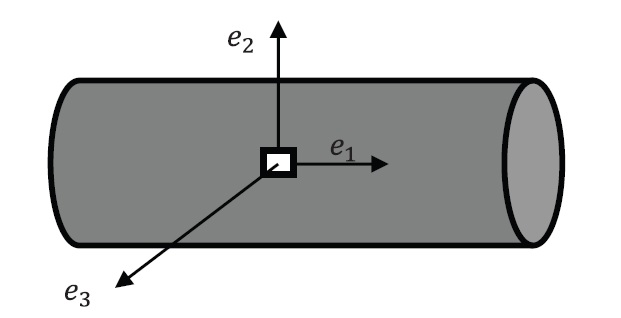 As shown in the sketch, the orthonormal basis vectors are chosen in this example such that

is aligned with the longitudinal axis of the pipe and

is vertical. The analyzed part of the pressure wall is taken to be perpendicular to

. The normal stress component in the longitudinal direction is:

The normal stress component in the direction of the vector

The von Mises stress is:

A soil specimen is in a confined compression test as shown in the figure. If the soil material is weak in shear, find the potential orientation of the failure plane and find the shear stress on that plane.

The plane of maximum shear is oriented at

to the principal planes. Since the specimen is in a confined compression test, therefore, in the current coordinate system, there are no shear stresses. Since

, the maximum shear stresses will occur on a plane oriented at

to the vertical direction. The shear stress on that plane will have the value: