The topics presented here were first introduced by Augustin-Louis Cauchy in the nineteenth century. Cauchy introduced the idea of stress or traction vectors which are force vectors per unit area. He then introduced the stress as a

symmetric matrix. The stress matrix is perhaps one of the early concepts that promoted the study of vectors and matrices. The word tensor that is used to describe a matrix is perhaps due to the fact, as will be shown here, that the stress tensor acts on area vectors to produce traction vectors.

is exerted by the removed material on an area

surrounding that point. The traction vector

at this point considering the surface with the normal vector

By invoking Newton’s third law of motion (every action has an equal and opposite reaction), the traction vector acting on the corresponding point on the removed material whose normal vector is

acting at a point in an area with normal vector

symmetric matrix, which is called the stress matrix or stress tensor. Knowing this matrix allows the calculation of any traction vector on any plane passing through that point. First, we consider an infinitesimal cube (Figure 2) at a point inside the material and we consider the three faces perpendicular to the three basis vectors

. The force per unit area vector on each of these three faces has three components and therefore, in total, there are nine components. We then set

as the stress component on the face with normal

and acting in the direction

. Notice that in some textbooks, this definition could be reversed. A tetrahedron can be formed by considering four faces perpendicular to

, and an arbitrary vector

(Figure 3). We are going to use the stress components to find the traction vector acting on the arbitrary area whose normal vector is

is the area of the surface with normal

are the areas of the triangular faces perpendicular to

respectively (Can you derive the above formula using the properties of the cross product?). Setting

Invoking Newton’s equations of equilibrium, the sum of the forces acting on the tetrahedron (including the gravity force

can be related to the height

of the tetrahedron perpendicular to

in the equilibrium equations, rearranging, and taking the limit as the volume of the tetrahedron goes to zero, (i.e., as

) lead to the linear relationship between the traction vector

and the unit normal vector

is a linear operator that acts as a linear function from

is a unit vector, the result 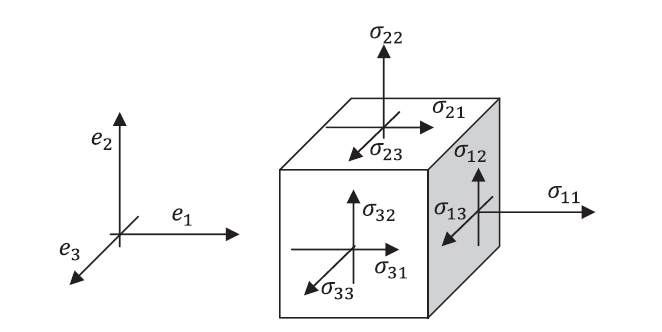 Figure 2. Definition of the components of the stress matrix

Figure 3. Cauchy stress tetrahedron. (a) Traction components on the faces perpendicular to the basis vectors. (b) Components of the traction vector

on the inclined face. (c) Areas of the different faces.

Symmetry of the Stress Matrix:

Because of moment equilibrium whether the body is in static or dynamic equilibrium, it will be shown that in common materials, the Cauchy Stress Tensor is a symmetric tensor, i.e.,

. According to Euler’s laws of motion, the rate of change of the angular momentum

in the material is equal to the moment of the external forces. Euler’s laws can be applied to an
infinitesimal cuboid with external forces acting on its faces as shown in Figure 4. The moment around the axis perpendicular to the plane shown and passing through the bottom left corner (black dot), neglecting smaller quantities, can be evaluated as follows:

has the following form:

is the angular acceleration and

is the polar moment of inertia. Equating

and taking the limit as the volume goes to zero( 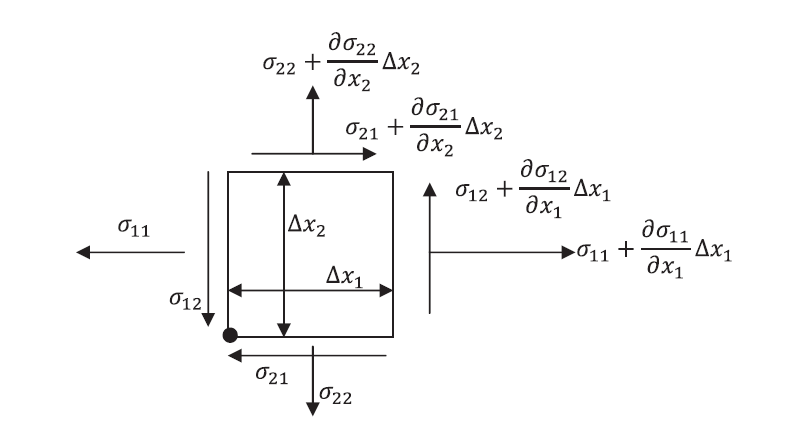 of an infinitesimal cuboid with dimensions

Given a state of stress described by

and given a plane with perpendicular

is a real number representing the component of the force acting perpendicular to that plane and is given by (positive for tension and negative for compression):

While the shear stress

is the magnitude of the component of the traction vector acting parallel to the surface of the plane:

. Consider a plane with normal

. The black arrow in the figure below indicates the direction of the plane, the traction vector

is indicated by the blue arrow, the green arrow (outwards indicate tension and inwards indicate compression) shows the normal stress while the red arrow indicates the direction of the shear stress vector. The values are given next to the table. Try it out by changing the values in the boxes below and hitting enter (Notice that the vector

is normalized before any computations are performed):
Try to answer the following questions:

Now try to answer the same questions on the three dimensional example below by changing the values in the box and hitting enter:

is symmetric, there exists a coordinate system in which the component form of

The principal stresses are denoted

are the corresponding normalized eigenvectors, then

is a rotation. The stress matrix in this particular coordinate system will be diagonal:

. The square on the left in the figure below is aligned with the original coordinate system. The red and blue arrows represent the vectors acting on the horizontal and vertical planes, respectively. The example below finds the eigenvalues and eigenvectors of the stress matrix. Then, a coordinate transformation described by the matrix

whose rows represent the eigenvectors of

Similarly, the example below illustrates the concept of rotating a cube into the coordinate system described by the eigenvectors of