is called a linear vector space over the field of

if the two operations (vector addition)

are defined and satisfy the following 8 axioms:

are called scalars. In general,

is either the field of real numbers

or of complex numbers

. For the remainder of this article,

is assumed to be the field of real numbers

unless otherwise specified.
In the history of the development of linear vector spaces, the following statements sometimes appeared in the definition. However, the above 8 essential axioms can be used to prove them.

Notice that in the above definition and statements, the hat symbol was used to distinguish the zero vector

from the zero scalar

. However, in the future,

will be used for both and it is to be understood from the context whether it is the zero vector or the zero scalar.
Examples of linear vector spaces include the following sets:

of a vector space

is called a subspace if

.
In other words, a subset

of a vector space

is called a subspace if it is closed under both vector addition and scalar multiplication. For example, the set

is a subspace of

be a linear vector space over

. A set of vectors

can be expressed linearly in terms of the other elements in the set; i.e., the only linear combination that would produce the zero vector is the trivial combination:

This means that there are multiple combinations that would give the zero vector. For example, choosing

then, the set is automatically linearly dependent since the following non trivial combination

would produce the zero vector:

of a linear vector space

can be expressed as a linear combination of the elements of

is a basis of

if and only if the following two conditions are satisfied:

The dimension of a linear vector space

is the number of elements in its basis set.
For example

is a two dimensional space, because its basis set

is a basis set of

Proof:  Use the linear independence of the basis set

to prove the result.

Click on the image below to interact with this example. Input the components of the vectors

. The tool draws the vectors

in the directions of 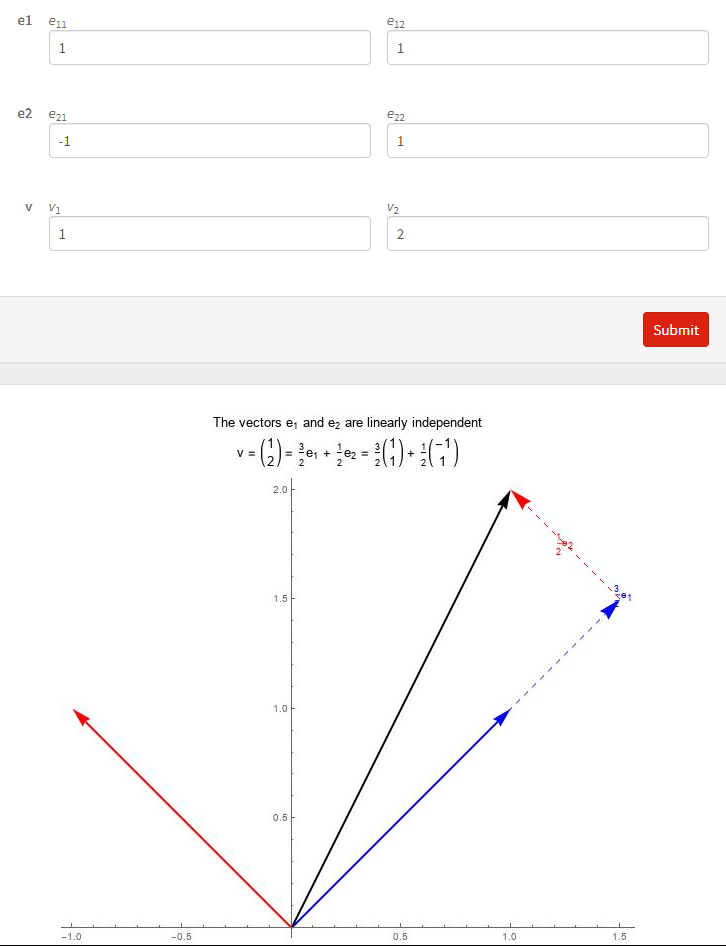