. The measurement on the right should be recorded as

The degree of precision of a computational device depends on the algorithm of computation and storage capacity of the device. For example, a calculator might do calculations up to a particular accuracy, say ten decimal digits. Traditionally computer coding had different degrees of numerical precision for example: Single precision and double precision. The storage of numbers in these cases uses the “floating point” storage in which a number is stored as a significand and an exponent. More recently, some coding software adopt an arbitrary precision where the number of digits of precision of a number is limited only by the available memory of the computer system. It should be noted that modern computers have the ability to store enough numbers to ensure very high degree of precision for the majority of practical applications, in particular those applications described in these pages.

is assigned this number, it automatically adopts its precision which is 23 (23 significant digits). We can then use the command

. This command stores a rounded value of

with machine precision (16 significant digits) into b. Therefore,

, Mathematica uses the least precision in the calculations (machine precision) and so the result is zero. We can reset the precision of

to be 23 significant digits. Then, in that case

. Then, when we subtract

Using the same classical example, we can also differentiate the errors in hitting the target (i.e., the difference between the positions of the dart throws and the Bull’s eye) into two types of error: random error and systematic error. A random error is the error due to natural fluctuations in measurement or computational systems. By definition, these fluctuations are random and therefore, the average random error is zero. For the accurate throws shown in Figure 1 (left column), whether the measurements are precise or not, the average position of the five throws is the Bull’s eye. In other words, the average error is zero.
A systematic error is a repeated “bias” in the measurement or computational system. For the inaccurate throws shown in Figure 1 (right column), the thrower has a tendency or bias to throw into the left bottom side of the Bull’s eye. So, in addition to the random error, there is a systematic error (bias). 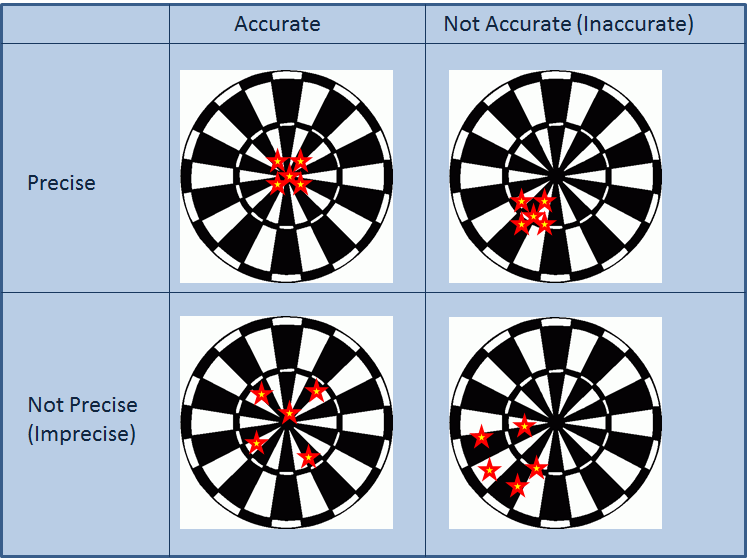 Figure 1. Illustration of accuracy and precision

Figure 2. Degree of precision of a ruler

Measurement devices are used to find a measurement

as close as possible to the true value

. Similarly, numerical methods often seek to find an approximation for the true solution of a problem. The error

Another measure is the relative error

. The relative error is defined as the value of the error

normalized to the true value:

In general, if we don’t know the true value

, there are methods for estimating an approximation for the error. If

is an approximation for the error, then, the relative approximate error

There are two types of errors that arise in computations: round-off errors and truncation errors.

Round-off error is the difference between the rounding approximation of a number and its exact value. For example, in order to use the irrational number

in a computation, an approximate value is used. The difference between

has a rounding approximate error of around

When we use a computational device, numbers are represented in a decimal system. The precision of the computation can be defined using different ways. One way is to define the precision up to a specified decimal place. For example, the irrational number

approximated to the nearest 5 decimal places is 3.14159. In this case, we know that the error is less than 0.00001. Another way is to define the precision up to a specified number of significant digits. For example, the irrational number

Round-off errors have an effect when a computation is done in multiple steps where a user is rounding off the values rather than using all the digits stored in the computer. For example, if you divide 1 by 3 in a computer, you get 0.333333333333. If you then round it to the nearest 2 decimal places, you get the number 0.33. If afterwards, you multiply 0.33 by 3, you get the value 0.99 which should have been 1 if rounding had not been used.

Even when computers are used, in very rare situations, round-off errors could lead to accumulation of errors. For example, rounding errors would be significant if we try to divide a very large number by a very small number or the other way around. Another example is if a calculation involves numerous steps and rounding is performed after every step. In these situations, the precision and/or rounding by the software or code used should be carefully examined. Some famous examples of round-off errors leading to disasters can be found here. See example 4 below for an illustration of the effect of round-off errors.

function can be represented using the infinite sum:

In fact, this is how a calculator calculates the sine of an angle. Using the above series,

where 0.3 is in radian can be calculated using the first two terms as:

which in fact is a very good approximation to the actual value which is around 0.295520207. The error, or the difference between 0.2955 and 0.295520207 is called a truncation error arising from using a finite number of terms (in this case only 2) in the infinite series.

If the approximate value

is obtained using an iterative method, i.e., each iteration

would produce the approximation

, then, the relative approximate error is defined as:

In such cases, the iterative method can be stopped when the absolute value of the relative error reaches a specified error level

The width of a concrete beam is 250mm and the length is 10m. A length measurement device measured the width at 247mm while the length was measured at 9,997mm. Find the error and the relative error in each case.

For the width of the beam, the error is:

The relative error is:

For the length of the beam, the error is:

The relative error is:

This example illustrates that the value of the error itself might not give a good indication of how accurate the measurement is. The relative error is a better measure as it is normalized with respect to the actual value. It should be noted however, that sometimes the relative error is not a very good measure of accuracy. For example, if the true value is very close to zero, then the relative error might be a number that is approximately equal to

and so it can give very unpredictable values. In that case, the error

Use the Babylonian method to find the square roots of 23.67 and 19532. For each case use an initial estimate of 1. Use a stopping criterion of

The following table shows the Babylonian-method iterations to find the square root of 23.67 until

. Excel was used to produce the table. The criterion for stoppage was achieved after 6 iterations. 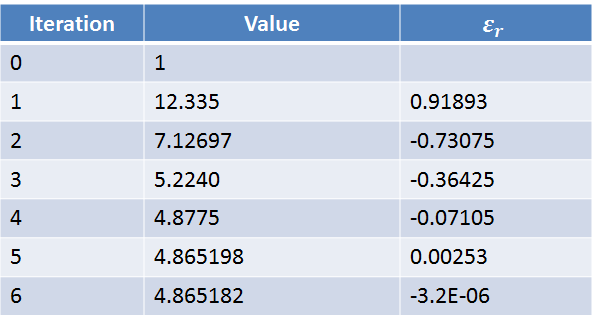 . Excel was used to produce the table. The criterion for stoppage was achieved after 11 iterations. 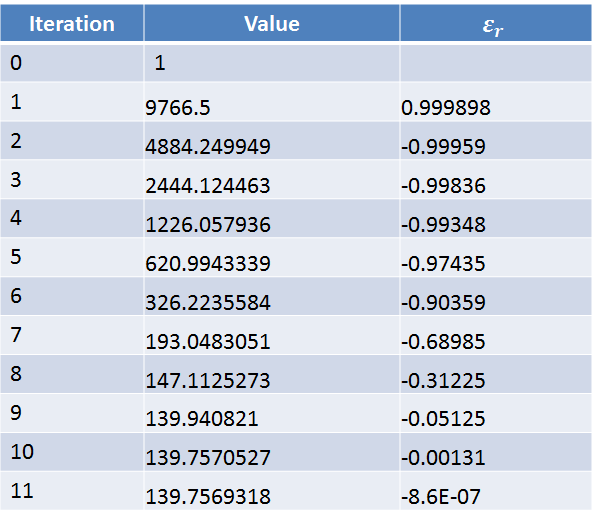 You can use Mathematica to show the square root of these numbers up to as many digits as you want. Notice that we used a fraction to represent 23.67, otherwise, it would resort to machine precision which could be less than the number of digits specified. Copy and paste the following code into your Mathematica to see the results:
View Mathematica Code:

The Babylonian method to find the square root of a number can also be coded in Matlab. You can download the Matlab file below:

is in radian can be represented as the infinite series:

be the number of terms used to approximate the function

. Draw the curve showing the relative approximate error as a function of the number of terms used when approximating

. Also, draw the curve showing the value of the approximation in each case as a function of

We are going to use the Mathematica software to produce the plot. First, a function will be created that is a function of the value of

. This function has the form:

The relative approximate error when using

A table of the relative error for

between 2 and 20 can then be generated. Finally, the list of relative errors and the approximations can be plotted using Mathematica.
Note the following in the code. The best way to achieve good accuracy is to define the approximation function with arbitrary precision. Therefore, no decimal points should be used. Otherwise, machine precision would be used and might lead to deviation from the accurate solution as will be shown in the next example. The angles are defined using fractions and after evaluating the functions, the numerical evaluation function N[] is used to numerically evaluate the approximate value after adding enough terms!
View Mathematica Code

Approximate the function cos(x) with a specified number of terms is coded in Matlab as follows. The main script calls the function approxcos prepared in another file and outputs the approximation.

The plot of the relative error is shown below. For

, the relative error decreases dramatically and is already very close to zero when 4 terms are used! However, for

, the relative error starts approaching zero when 14 terms are used!

The plot of the approximate values of

as a function of the number of terms is shown below. The approximation for

approaches its stabilized and accurate value of 0.0707372 using only 3 terms. However, the approximation for

. The approximation starts approaching its stabilized and accurate value of around -0.83907 after using 14 terms!

is in radian can be represented as the infinite series:

be the number of terms used to approximate the function

. Show the difference between using machine precision and arbitrary precision in Mathematica in the evaluation of

Each positive term in the infinite series of

is followed by a negative term. In addition, each term has a value of

, the series would be composed of adding and subtracting very large numbers. If machine precision is used, then round-off errors will lead to the inability of the series to actually converge to the correct solution. The code below shows that using 140 terms, the series gives the value of 0.862314 which is a very accurate representation of

! This is because in effect we are adding and subtracting very large numbers, each with a small round-off error because of using machine precision. This problem is termed Loss of Significance. Since the true value is much smaller than the individual terms, then, the accuracy of the calculation relies on the accuracy of the differences between the terms. If only a certain number of significant digits is retained, then, subtracting each two large terms leads to loss of significance!