In general, force is perceived as push or pull. Forces arise from different sources/causes like gravity, contact forces between bodies, pressure force by fluids on surface of solids, friction forces, electrostatic forces on charged particles, etc.

Physically, force has a magnitude and a direction in the space, and therefore, it is a vector quantity called the force vector. In this regard, the terms force and force vector are equivalent.

The magnitude of a force vector has the dimension

and the SI unit of Newton denoted by

if not drawn proportionately.

Denoting a force vector with

is a unit vector expressing the direction of

has the unit of Newton, and the unit vector has no dimension and unit. Equation 1 readily implies that:

. The line of action and the unit vector are geometrical objects.

can be resolved into their Cartesian components using the CVN:

are the scalar components each having the dimension and unit of force. A graphical representation of

in the cartesian frame is shown in Figure 2. It should be noted that the

axes have the unit of force (no length).

Figure 1. A graphical representation of a force vector and its components (rectangular and scalar) in a Cartesian frame.

A force vector, unlike a general vector, conveys a physical phenomenon. We say a body is subjected to a force (or a system of forces), or a force acts on a body. This expresses the fact that a force (or a system of forces) is acting or exerted at a particular location (or locations) of the body. This is a natural perception that pulling on one’s arm is different from pulling on one’s leg. Therefore, the location at which a force vector is acting is deterministically important and not arbitrary. A force vector, by its nature, acts at a point. This is graphically demonstrated by drawing the force vector with its tail or head touching the point at which the force acts (Figure 1). Depending on the tail or the head of the vector touching the point, this representation may also imply a sense of pull or push by the force (Figure 1). The sense of pull or push is not important in many problems (for example rigid body equilibrium problems), but, only the force vector and the point at which the force is acting become important in the calculations. As a tangible example, the a sense of pull or push is not involve in finding the acceleration of an object using the Newton’s second law.

Figure 2. Graphical representations of forces acting at points of an object.

Concentrated force. In reality, forces are in the form of loads. Load is a set of forces distributed over an area of a body. For example, we perceive and feel that the ground reaction force is distributed on the soles of our feet; we do not feel a sharp feeling of a force there. In fact, all force in nature are distributed, and there is no force concentrated at or acting on a point (a mathematical notion with no dimension). However, we idealize or approximate a load by a concentrated force being represented by a force vector and shown by an arrow. This idealization is performed when the area on which the load is distributed is relatively small compared to the size of the body. Moreover, the effects of loads or distributed forces are manifested by equivalent concentrated forces in the problems in which the overall effect of the load on the whole body is important, not the local effects.

Remark: since a force vector is represented by an arrow (vector), all calculations related to forces are done based on the vector operations explained in chapter 2.

be a system of

forces (set of forces), their resultant or the resultant force

is the vector sum over the forces:

which can be expanded to summing over the components using the CVN:

Remark: the forces (force vectors) should become concurrent before applying the vector operations. 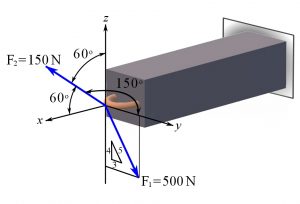 Force directed along a line

A force vector has a line of action being colinear with the force vector and indeed with the unit vector specifying the direction of the force. In many problems, the force is directed along a line-shape physical object or structure like a cable or a bar. In such a case, the line of action of the force is colinear with the physical shape of the structure (Figure 3). Therefore, the unit vector expressing the direction of the force can be obtained through finding a colinear vector (arrow) with the line of action or the structure. To do this, we initially set or consider the given a Cartesian coordinate system. Choosing a point as the coordinate system origin, if not given, is arbitrary, however, we should try to wisely choose a point that will facilitate the calculations. Then, two points, say

, on the line of action or the structure are considered. These are points with known coordinates or points that their coordinates are easy enough to calculate (Figure 3). Considering the position vectors of

, we find the (displacement) vector

is obtained by normalizing

by its magnitude (length),

can be written as:

As shown in Figure 3, the graphical representation of

are colinear. Note that

has the dimension of force,

has the dimension of length, and the unit vector

has no dimension. Despite having different dimensions and units, all vectors can be graphically shown in one figure.

Figure 3. Obtaining the force vector of a force directed along a line. 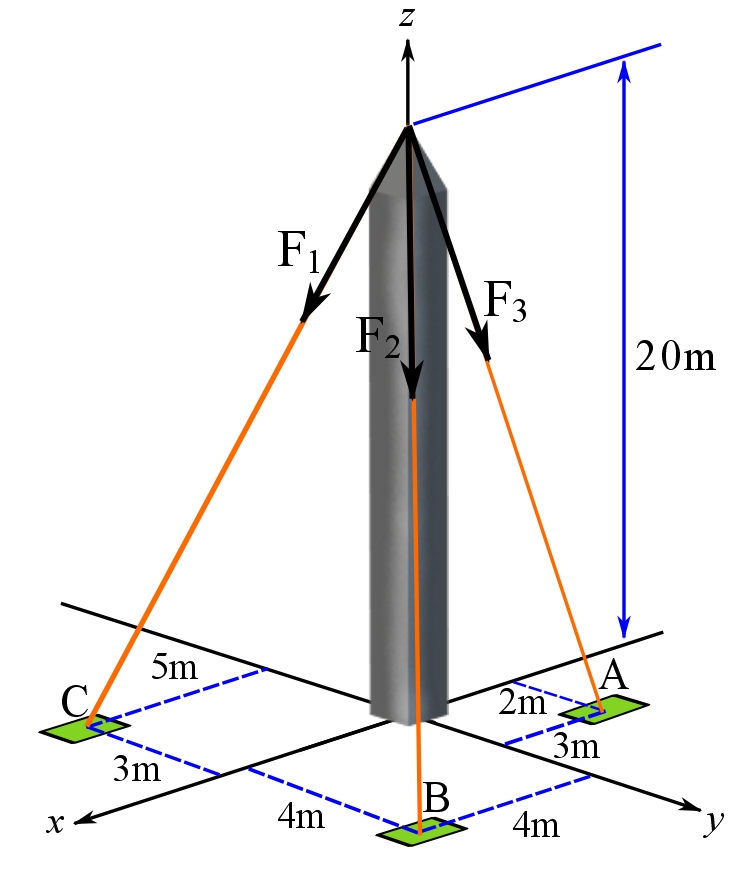